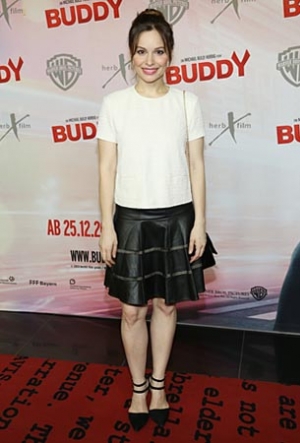 Mina Tander at the press conference to launch "Buddy" in Berlin, November 19, 2013

Mina Tander, born December 4, 1978, in Cologne, already entered the stage as a member of her school's theatre group. At a meeting of school theatre groups in Münster, the artistic director of the Münster theatre discoverd her acting talent. In 1995, Tander made her movie debut in a supporting role in the TV movie "Absprung" alongside Bibiana Beglau. After finishing school, she attended actor's training in Cologne from 1998 to 2000 and started her acting career in 1999. In a short space of time, Tander appeared in three successful films on the movie screen: In the coming of age story "Hinter dem Regenbogen" ("Over The Rainbow", 1999), Tander played a fun-loving teenager, in "Harte Jungs" ("Ants in The Pants", 2000), she played a blonde sex bomb, and in Marc Rothemund's "Schule" ("No More School"), Tander played the part of a cheeky high-school graduate.

During the following years, Mina Tander, who attended actor's training at Berlin's Ernst-Busch-Schule since 2004, mainly appeared in key supporting roles in numerous TV and movie productions, including the award-winning drama "Fremder Freund" ("The Friend", 2003), and in the ensemble films "Oktoberfest" (2005) and "Selbstgespräche" ("Come In and Burn Out", 2008). Tander played another leading role alongside Sebastian Koch and Wotan Wilke Möhring in Jan Fehse's relationship drama "In jeder Sekunde" ("At Any Second") that opened in German cinemas in late 2008.

In her next film, Tander starred in a quite different role: In "Maria, ihm schmeckt's nicht!" ("Maria, He Doesn't Like It!"), based on Jan Weiler's best-selling novel, she played a German-Italian woman whose shy German fiancé is confronted with her unconventional relatives from Italy.

Tander continued to prove her versatility as an actress: She played the mother of a to-be rap artist in "Zeiten ändern Dich" ("Electro Ghetto", 2010), the wife of an amnesiac crooner in the tragicomedy "Schenk mir Dein Herz" (2010) and the dream girl of a struggling music producer in the romantic comedy "Männerherzen … und die ganz ganz große Liebe" (2011). She then was the female lead in the mystery thriller "Du hast es versprochen", which premiered at the 2012 Venice IFF. The film has Tander playing a physician who gets into grave danger while vacating on an idyllic island.

She reprised the role of racecar driver Andalee Schrott for the sequel "V8² - Die Rache der Nitros" ("V8² - Revenge Of The Nitros", 2014). Tander next played a bestselling author caught in a psychological battle with a struggling documentary filmmaker in "Das Hotelzimmer" (2014) and an overprotective mother in the school satire "Frau Müller muss weg" ("Ms. Mueller Must Go", 2015).

After that, Tander appeared in a series of TV productions: In "Das doppelte Lottchen" ("Lisa and Lotti", 2017) she played the unloved new girlfriend of the twins' father, and in Urs Egger's psychodrama "Der Sohn" (2017) she starred as a helicopter mother whose pubescent son appears to be a sex murderer. From 2016 to 2019 she played a leading role in the German-American agent series "Berlin Station" as a tough BND agent.

On the big screen, Tander played a supporting role in the large ensemble of the romantic comedy "Safari - Match Me If You Can" (2018) and starred as the sceptical teacher of the young heroine in the children's film "Rocca verändert die Welt" (2019).