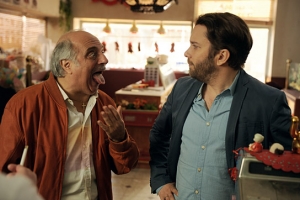 Sequel to the comedy "Maria, ihm schmeckt's nicht!" ("Maria, He Doesn't Like It!") from 2009: Jan and the Italian-German Sara got married and they are looking forward to their honeymoon in New York – away from the restraints of the family. Yet, things do not turn out as planned when Sara's father Antonio decides to join the couple to keep an eye on his pregnant daughter. Now both the marriage and Jan's good relationship to his father-in-law are at risk. To make things worse, wayward Antonio winds up in all sorts of mishaps in America.