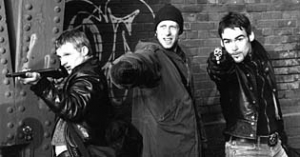 The Dunckels are three young "twenty-somethings" who kill two policemen after a chaotic bank raid; a problem which forces them to make a quick escape across the Polish border.

Three journeys begin from here: Ben Dunckel, 19 years old, suffering from a gunshot wound, slightly crazy, on the run with an Iranian woman taxidriver as hostage - and his only chance to become an adult before he dies.... Fred Dunckel, 25 years old, not very enamoured by the idea of following his brothers any longer, choleric, lonely and much too generous to the people he meets on the way... And Tom Dunckel, the eldest of the brothers, a gambler who led his brothers astray so that he could himself escape into an illusory world from which he only emerges when there is no other way out... The film recounts in three episodes in succession the clueless escape attempts by three very different brothers. Each story is a portrait in itself ; together, they are a picture of a family in ruins.