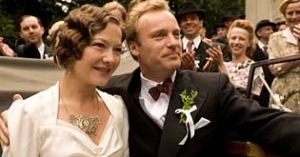 1937, a small village in Sudetenland. The saw mill owner
Habermann is the biggest employer in his village. He
employs Germans and Czechs alike and is deeply attached
to the country where both nationalities lived for centuries.
He becomes married to Jana, a young and beautiful Czech
woman, who is half Jewish. Although Habermann is not
interested in politics or ideology, he and his family will be
steamrolled by the insanity of World War II …


Habermann is based on true events. The film shows how
politics and ideology can turn friendship into mistrust and
hate with a historical take on a specific period between
1937 and 1945, known due to the excessive ex pulsion of
Sudeten Germans on the border between Germany and
Czechoslovakia. The persistent discussion in Europe about
the validity or invalidity of the "Benes de crees", which provided
the legal cover for this wrong in Sudetenland, shows
that this subject, which has been taboo for such a long
time, is still raw.