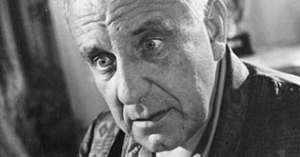 O. E. Hasse was born July 11, 1903, in Obersitzko, as the son of a blacksmith. He visited secondary school from 1915 on and became a member of a theatre club as a lay actor. After finishing school, Hasse studied law for three terms in Berlin and simultaneously attendend Max Reinhardt's drama school.

In 1924, Hasse made his first experience in the film business as an extra in F. W. Murnau's "Der letzte Mann" ("The Last Laugh"). After several performances at Sommertheater Thale in the Harz region, he became a cast member of Junge Bühne Berlin, and went to Deutsches Theater in 1925/26. From 1926 to 1929, he performed at Vereinigte Theater Breslau and at several theatres in Berlin and was a cast member of Munich's Kammerspiel from 1930 to 1939.

In Munich, Hasse met Karl Valentin and worked with him for Valentin's film "Der verhexte Scheinwerfer". In 1936, he directed his first play, and from 1939 on, he played for a short period of time at Deutsches Theater in Prague. In 1944, Hasse was drafted by Wehrmacht but was soon deployed to "Hauptfilmstelle der Reichsluftwaffe" to participate in the short documentary film "Rettet den deutschen Wald".

From 1945 on, Hasse was a cast member of Hebbel Theater, and of Schlossparktheater. Furthermore, he appeared at numerous Berlin theatres. In 1949, the US State Department invited him to tour the United States. After his return, Hasse played in West Germany, in Austria, and in Switzerland, and dubbed Bogart, Laughton, and Tracy from 1950 on. In 1959, he was a member of the jury of the Berlin International Film Festival, and in 1961, he toured the USA as Elisabeth Bergner's partner with a production of G. B. Shaw's "Dear Liar".

Until 1945, Hasse only played minor roles on the big screen, mainly in entertainment movies. But he became enormously successful in the 1950s. In Hitchcock's "I Confess", Hasse played the murderer – an exiled artist, helpless and paranoid. Furthermore, Hasse starred as a Colonel in "Decision Before Dawn", as a high-ranking adversary of Clark Gable in "Betrayed", and – of course – the leading role in "Canaris" ("Deadly Decision"). He became internationally known as an actor of assertive,yet never ruthless persons in uniform.