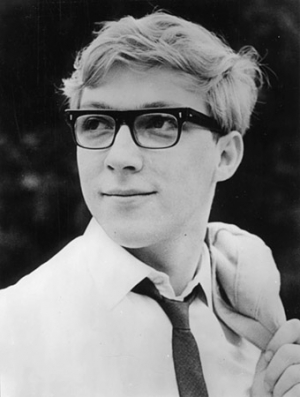 Jaecki Schwarz, born February 26, 1946, in Berlin, worked as a chemical technician after finishing school. He was then accepted at Filmhochschule Babelsberg where he was discovered by Konrad Wolf in 1967 for the leading role in his autobiographical film "Ich war neunzehn" ("I Was Nineteen"). Schwarz proved his deep emotional charisma as a young German who returns home in 1945 with the Red Army. After celebrating a huge success with the film, Schwarz graduated from drama school.

Being an already well-known film actor, he became a cast member of Bühnen der Stadt Magdeburg. In 1974, Schwarz went to Berliner Ensemble where he was a cast member until 1997. Besides occasional performances on stage, Schwarz was mainly seen in movie and TV productions. In the multi-part TV movie "Krupp und Krause", Schwarz played young Krause. Furthermore, he starred alongside Manfred Krug in "Weite Straßen – stille Liebe". He then played a supporting role in Egon Günther's internationally successful film "Der Dritte" ("The Third").

He also played an intellectual, proud student alongside Jutta Hoffmann in Günther's at the time controversial film "Die Schlüssel". Schwarz nearly became DEFA-Film's default cast for the role of the nice young man and colleague but was able to shape these characters with deadpan humour and a sense of everyday life. Schwarz played a far more sophisticated role in "Bürgschaft für ein Jahr" as the sponsor of a single mother (Katrin Sass) who at first conveys "the image of an insecure person who comes across as inhibited and nervous and keeps out of everybody else's affairs. But he noticeably engages more and more with his 'welfare case' and becomes a reliable ally (thus increasing the contrast to the familial lack of initiative and to the growing lethargy of his own wife)" (Schütt, 1981).

In 1983, Schwarz played the role of pastor Bernhoff in the TV production "Vertreibung aus dem Paradies" that was not finished after director Celino Bleiweiß fled to West Germany. With few exceptions, for instance as the father of 15-year old Henning, who is devastated by his girlfriend's death, in "Abschiedsdisco", Schwarz continued to play certain character types: civil servants and soldiers, for instance, in "Erster Verlust" based on Brigitte Reimann's story "Die Frau am Pranger". Policemen in more or less exposed positions almost became his signature role type.

Schwarz then became popular with TV entertainment such as the TV series "Gefährliche Fahndung" (1975 to 1978) and "Der Spuk von draußen" (1985 to 1987), as well as the TV series "Schauspielereien" and "Polizeiruf 110". After the German reunification, Schwarz was able to continue his acting career without interruption with appearances in TV series like "Spreewaldfamilie" (1990), "Liebling – Kreuzberg", and "Praxis Bülowbogen" (1992/93), as well as in numerous TV crime series. In 1996, he finally became inspector Schmücke in "Polizeiruf 110" who is always clad in a suit and stolidly carries out his duty.

He played a crook in the crime comedy "Zwei alte Gauner" (2001) with Peter Weck, a bank director in the Christmas comedy "Ein Sack voll Geld" (2002), a robber in the fairy tale film "Rotkäppchen" (2005) and the main character's godfather in the cheerful Christmas film "Hilfe, meine Tochter heiratet" (2006),  to name just a few of his roles. Together with his "Polizeiruf 110" partner Wolfgang Winkler, he had the title role in the comedy "Das Traumpaar" (2008), about two fun-loving older gentlemen who are best friends that love to quarrel.

After quitting "Polizeiruf", Schwarz took on a leading role as a health officer in the hospital series "In aller Freundschaft" from 2012 to 2014. In October 2013, Schwarz suffered an eye infarction in his right eye and has only ten percent vision as a result. In the following years, he sporadically appeared in guest roles in series such as "Heiter bis tödlich" (2016) and "SOKO München" (2017). He had a small role on the big screen as a walker with a dog in Detlev Buck's romantic comedy "Wuff - Folge dem Hund" (2018). He also continued to play the quirky ex-policeman Sputnik in "Ein starkes Team."

Jaecki Schwarz, whose life partner from 1986 to 2006 was actor Hagen Henning, is a member of the board of trustees of the Queer Nations initiative. In a talk show in 2012 he said, "I am three marginal groups - gay, alcoholic, East German" (note: Schwarz has been sober since 1990).

In February 2021, together with 184 other gay, lesbian, bisexual, queer, non-binary and trans* actors, he signed the #actout manifesto and was part of the mass coming-out on the front page of the Süddeutsche Zeitung magazine (although he himself had been living openly gay for a long time). Initiated by Godehard Giese, Eva Meckbach and Karin Hanczewski, the initiative positioned itself against discrimination and called for more visibility and diversity in the theater, film and television industry.