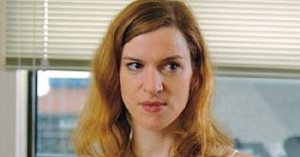 Inga Busch, born 1968 in Neuss, attended actor's training in Berlin with Heidi Walier and in Moscow with Olga Kudriaschow before she went to Trapp-Schauspielschule in Cologne. In 1991, she made her movie debut in Detlev Buck's country policeman comedy "Karniggels". She then performed at several theatres before she returned to the movie screen, for instance, in Oskar Roehler's film "Gentleman", and to the TV screen, for instance, in Nico Hofmann's thriller "Der Sandmann" and in the TV series "Freunde wie wir".

Besides key supporting roles in the children's film "Blöde Mütze" ("Silly's Sweet Summer", 2007) or in the musical "Märzmelodie" ("Melodies of Spring", 2008), among other films, Inga Busch most recently caused a stir with her leading roles in "Palermo Shooting" (2008), directed by Wim Wenders, and in Monika Treut's highly praised drama "Ghosted" (2009). In Treut’s film, which premiered at the Berlinale Panorama, she took on the role of an artist from Hamburg who meets a mysterious woman in Taipeh, following the unsolved death of her Taiwanese lover.

Likewise, in 2009 Inga Busch performed as 'Frigga' in a theatrical production of "Das Leben des Siegfried" at the Nibelungenfestspiele Worms. In the following years she continued acting in theatre productions, including plays at the Berliner Volksbühne, the Schauspielhaus Zurich and the Schauspiel Hannover.

Alongside this Busch was also taking part in numerous television productions. Among other roles, she played a police psychologist in the highly praised series "KDD - Kriminaldauerdienst" (2010) and a member of the state security protecting a tax evading Swiss banker and whistleblower in Markus Imboden's thriller "Mörderische Jagd" (2012). In 2013 she took on the role of a police inspector in the children's series "Binny und der Geist" ("Binny and the Ghost").

Busch was also still active in cinematic productions. She had a minor role in the Roadmovie "Offroad" (2011), as Elyas M’Barek's neighbour. She was also a part of the ensemble cast for the tragicomedy "Das traurige Leben der Gloria S." ("The Tragic Life of Gloria S.", 2011). Robert Bramkamp's farce "Art Girls" premiered at the Hof International Film Festival 2013, in which Busch played the lead role as an artist from Berlin who experiences a bizarre evolutionary leap whilest designing an exhibition for a biotech corporation. She reprised the role in the "Making of" Mockumentary "Neue Natur - Art Girls intern" (2015).

She also had a supporting role in the prize winning film "Dora oder die sexuellen Neurosen unserer Eltern" ("Dora or The Sexual Neuroses of Our Parents" 2013-2015), which is about a mentally disabled girls first sexual experiences with an older (not disabled) man. In the three part television epic "Tannbach - Schicksal eines Dorfes" ("Line of Separation", 2015) she had a bigger supporting role as a village innkeeper whose son had been in the Hitler Youth during the war and continued on as an eager border guard afterwards.

In January 2016 the film "Ferien" premiered at the Filmfestival Max Ophüls Prize in Saarbrücken, in which Busch had the key role as a single mother who takes in an student with no goal in life only to leave her alone with the kids. In Saarbrücken "Ferien" was awarded the prize for best screenplay. Its theatrical release followed in Juli 2016. In the same year she took part in Wolfgang Murnberger's "Kästner und der kleine Dienstag"; a biographical film about the author Erich Kästner. In this TV movie she played the part of the children's book illustrator Marigold Ohser-Bantzer.