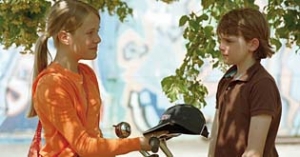 Twelve-year-old Martin is a little too small for his age. Too thin and too quiet, as his mother is unfortunately always reminding him. He and his blue baseball cap are joined at the hip, or rather, at the head. Martin and his parents have just moved to the quiet little town of Bellbach. A new home, a new school, but no new friends. Even on his first day, there’s trouble. Whilst out shopping Martin unwittingly blows the whistle on a boy stealing cigarettes and, from this moment on, Oliver is bent on getting his revenge from ‘stupid hat’! The second day isn’t much better because Martin winds up of all places in Oliver’s class. And what’s more, this great girl with translucent eyes and a lovely smile turns out to be none other than Oliver’s girlfriend.

With great ingenuity Martin somehow manages to get to know Silke. She even invites him out to ‘Riverpool’, an old, disused swimming pool in a river that was supposed to be Silke and Oliver’s secret meeting place. Martin lies down next to Silke, gazing lovingly into her face when suddenly, Oliver appears on the scene. All at once, their idyllic tryst is over. A day that began so well for Martin ends badly with a fight with Oliver and a row with Silke. Nevertheless, Martin slowly begins to understand Oliver. The more he gets to know him, the more he learns of the problems with which Oliver has to contend at home. Silke has a hard time at home too. In the end, Martin may not have any idea what will become of his love life, but he can be sure of one thing at least: now he’s found two friends for whom he’s prepared to go through thick and thin.