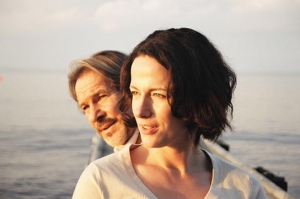 After the death of his beloved wife Maria, the successful product designer Jost discovers that she had been corresponding with an email friend. She did not admit to her illness in letters to this friend, but pretended that Jost’s life as a much-demanded designer was her own. Jost is in deep mourning and cannot bring himself to tell the email friend about his wife’s death. Instead, he continues the correspondence by adopting the role of his wife. When he falls in love with the unknown woman and sets out to find her, he realizes that she did not describe her life with complete honesty, either.

The "Ritz Palace" which Anni described as a luxury, cosmopolitan hotel at the coast is actually an isolated seaside inn, where Anni lives with her sister-in-law Jennie. Anni has an uncomplicated, purely sexual relationship with the married fishmonger Axel. Jost is not troubled by the fact that the "Ritz Palace" is really not the "Ritz Palace"; he still takes a room there. He is anxious to get to know this woman from the Internet...