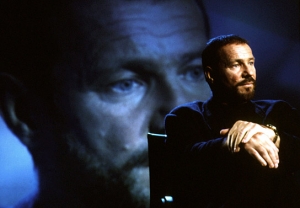 Ina Littmann, an ambitious journalist is investigating the story of best-selling author Henry Kupfer for a TV station. Kupfer had killed a prostitute as a teenager and went to prison for eight years. Since then, he is writing novels about violent crimes. His recent novel about a serial killer is titled "Der Kannibale" ("The Cannibal"). The more Ina finds out about Kupfer, the more she thinks that the novelist himself is a psychopathic killer who again and again is brutally killing prostitutes. To get top ratings for the TV station and to push her own career, Ina tries to convict Kupfer during a live TV show. But Kupfer is running his own game, and in it, Ina is playing the leading role.