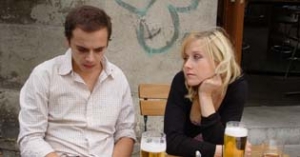 "Berlin Stories" was shot in Berlin and is inspired by the theater: three directors developed three astounding tales about the German capital based on rehearsals of a play by Volksbuehne-playwright René Pollesch. The film comments on the relationship between art and life in a tongue-in-cheek way.

Marlon, a young acting student, has to forget the rules of acting he has just learned before he can know how to flesh out his role. He plunges into the vortex of the city for two days and nights.
Lizzy constantly stages herself, but it always goes wrong: no money, no agency, no red carpet. She meets the cute callboy Julian in a bar and turns his biography into her story.
Ohboy, a flâneur, is afraid of the theater rehearsals, so he does not attend them. In a long walk down Potsdamer Strasse, which unites all of Berlin’s facets, he faces his fear of the script, and above all himself.