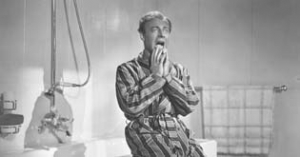 Model Husband
Comedy film about pedantic bank director Billy Bartlett who does not let his well ordered life be disturbed by any surprises. But his young wife Margaret misses the spontaneity in her married life and already thinks about divorce. Thereupon, Billy asks his newly-wed friend Jack for help. Jack suggests him to meet other women once in a while – exactly as Jack does himself. But before Billy goes out on his first extra-marital date, he is stopped by Jack’s wife Doddy who wants to prevent their best friends’ divorce. After hearing about her husband’s dubious recommendations, she persuades Billy to play a trick on Margaret as well as on Jack. They want to act as lovers to their spouses, who have gone out, to bring them both to their senses.