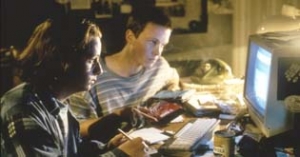 Based on an authentic case, the film "23" tells the story of Karl Koch, a computer hacker from Hanover, who loses his life at the end of the 1980s. Karl Koch is 19, when he leaves home to get away from the overbearing influence of his ultra-conservative father. After this equally sensitive as well as rebellious young man reads Robert Wilson’s cult book "lluminatus!", he noticeably falls into imagining that the world is now controlled by a secret organisation of "Illuminati".

One day the two crooks Lupo and Pepe talk both Karl and his friend David into using their hacker skills in order to get their hands on some top secret information and sell it to the KGB for lots of money. Yet, Karl is not up to the unrelenting pressure. He begins to take drugs, isolating himself ever more from his surroundings. His delusions of "Illuminati" now become transformed into a full-blown paranoia. A sensation-seeking journalist finally notices Karl – followed a little while later also by the police.