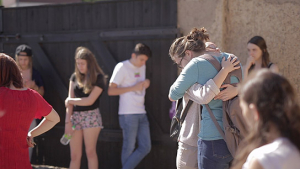 Essayistic documentary film that accompanies an international group of young people from Germany, Poland and Romania on their visit to the Buchenwald concentration camp. As part of a project, they explore how the past influences the present and what can be learned for the future from what happened before. The film looks at the persecution of minorities during the Nazi era and their continuing discrimination in the present. Even though many things have changed since then, certain mechanisms seem to repeat themselves. A special focus is on Sinti and Roma, who have their say in interviews. Until today, they have hardly any lobby and often have to live in refugee accommodation or makeshift housing.