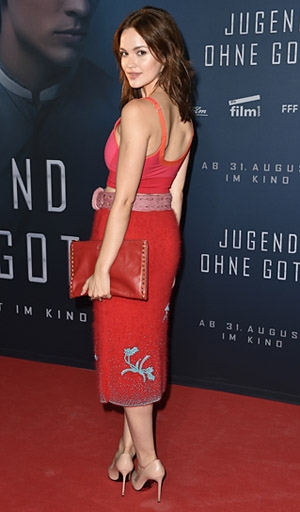 Emilia Schüle at the world premiere of "Jugend ohne Gott" in Munich on August 21, 2017

Emilia Schüle was born in Blagoweschtschensk, Russia. on November 28, 1992. While she was in elementary school, she took ballet and dance lessons and eventually came to acting through the workshop "Talents Getting Started" in 2005. After appearing in an advertisement, she played the lead in the short "Nichts weiter als" ("Nothing more Than"), which premiered at the 2008 IFF Berlin.

The same year, she played the title character in a TV adaptation of "Aschenputtel". After starring in the two-part TV drama "Die letzte Spur - Alexandra, 17 Jahre", she was cast in the TV period piece "Isenhart – Die Jagd nach dem Seelenfänger" (2011) and the feature film comedy "Unter Frauen" (2012), both directed by Hansjörg Thurn. Following a supporting role in Marc Rothemund's comedy "Mann tut was Mann kann" (2012), Schüle played a young prostitute in the controversial "Tatort" entries "Wegwerfmädchen" and "Das goldene Band".

Emilia Schüle was then cast as the female lead for the drama "Nemez", which premiered at the 2012 Hofer Filmtage and was released theatrically in 2013. In the film, she plays the lover of a young German-Russian, who is trying to leave his criminal past behind for her.

After that, she starred in the title role in the teen and cyber-mobbing drama "LenaLove" (2015) and as a mobster's wife in the highly acclaimed crime film "Auf kurze Distanz" ("Point Blank", 2016, TV). She also played the important role of Hedwig Freiberg, future wife of physician Robert Koch, in the TV mini series "Charité" (2017). In the three-part series "Ku'damm 56" (2016) and "Ku'damm 59" (2017), she starred alongside Claudia Michelsen and Heino Ferch.

On the big screen, Emilia Schüle could be seen in a supporting role in Markus Goller's road movie "Simpel" (2017) and she has one of the lead roles as a young rebel in the dystopian science fiction drama "Jugend ohne Gott" ("Godless Youth", 2017). Also in 2017, the comedy "High Society" as well as the coming-of-age drama "Es war einmal in Indianerland" ("Once Upon a Time in Indian Country") premiered in German cinemas.

In "Axel, der Held" ("Axel the Hero", 2017, released 2019) she portrayed the seemingly unattainable teenage love of a dreamy and fearful man. Schüle had a leading television role in the highly acclaimed three-parter "Ku'damm 59" (2018), as a slightly naive young woman who works as a nurse in a psychiatric ward.

In the second half of 2019 two films with Emilia Schüle opened in cinemas: "Axel, der Held" and Martin Schreier's 1961 German-German love drama "Traumfabrik" ("Dream Factory"), with Schüle as French dancer at the East German film production company DEFA. In 2021, belated due to the Corona pandemic, the start of "Die Vergesslichkeit der Eichhörnchen" followed, in which she plays a nurse who slips into the role of the late wife of a dementia patient.