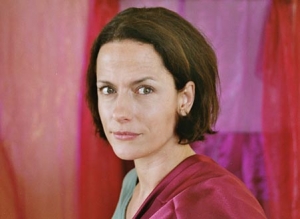 Claudia Michelsen, born on February 4th, 1969, in Dresden, attended Ernst Busch drama school in Berlin and played her first part in Rainer Simon's film "Die Besteigung des Chimburazo", followed by several TV movies and Jean-Luc Godard's "Allemagne 90 neuf zéro" ("Germany Year 90 Nine Zero", F 1991). At the same time, she further pursued her theatre career: From 1990 to 1995 she was a cast member of Berlin's Volksbühne where she performed in productions of Shakespeare's "The Tempest" and as Ulrike Meinhof in "Rosa Luxemburg – Rote Rosen für Dich".

Then, from the mid-1990s on, Claudia Michelsen was mainly to be seen in TV productions and played leading roles in ambitious major TV movies like Heinrich Breloer's "Todesspiel" or Roland Suso Richter's "Der Tunnel" (The Tunnel). Furthermore, Michelsen received the Max Ophuels prize for best actress for her role in the television play "Das schafftst du nie". Her critically acclaimed performance in the black comedy "Drei Chinesen mit dem Kontrabass" (Three Chinamen with a Double Bass) in 1999 heralded Michelsen's return to the cinema for a series of roles, mostly in minor parts. But in 2006 she again appeared in a leading role and played alongside Götz George in "Maria an Callas" (Maria To Callas), a romantic drama.

This was followed by supporting roles in the successful children's film "Paulas Geheimnis" and the third and fourth installments of the "Wilde Kerle" franchise. In 2007, Michelsen starred opposite Devid Striesow in the TV drama "12 heisst: Ich liebe Dich" about a East German citizen who is arrested for her Western contacts and subsequently falls in love with her interrogator. The same year, she played the lead in "42plus" which centers around a married woman who starts an affair with a teenage boy. Apart from a supporting part in Sönke Wortmann's bestseller adaptation "Die Päpstin" (2009), Michelsen focused her career on television work in the following three years and joined the cast of the crime series "Flemming". In 2010, the female lead in the comedy "Mensch Kotschie" marked her return to the silver screen.