How to Cook Your Life 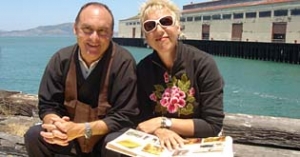 An upbeat documentary about the art of cooking, but also the art of cooking one’s life without burning it, adding too much salt or over-cooking it. Together, Doris Dörrie and Zen priest of cookery, Edward Brown, demonstrate that food means much more than just nutrition and that cooking is a feast of the senses, as well as an act of love and generosity. During the summer of 2006, Doris Dörrie and a small film crew followed Edward Brown to Scheibbs Buddhist Centre in Austria, then to the Tassajara Zen Mountain Center and the San Francisco Zen Center, where Brown taught people of all generations. His recipes are simple, full of taste and highly aromatic.

In this film, the camera is a participant observer at his cooking courses, it stands round the floured wooden table, watching the dumplings, the radishes, oranges and the carrots. It is also there when Edward Brown lecturers his students according to Zen master Dogen’s teachings of 1238: what, he asks, does cooking and eating mean to the community and the individual? Is cooking a political act? In what way does cooking reflect our approach to life and the world around us?

While she was in San Francisco, Doris Dörrie took a look at some of the city’s fast food restaurants; she also spoke to organic farmers, starving homeless people and to a woman whose diet consists solely of things that other people have throw away. Nowadays, 80 percent of America’s population no longer eat at home, or even cook. Anyone who cannot cook and isn’t rich has no option but to feed themselves cheaply and poorly. Not having any time to cook and eat together means a loss of community and culture. Learning to cook means learning how rich our own culture is, and taking an active part in its preservation.