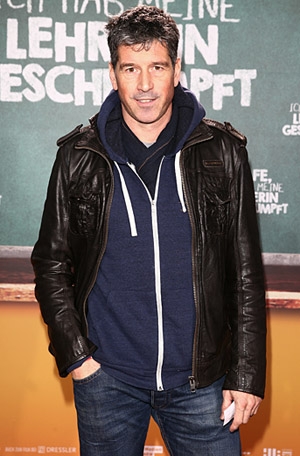 Wolfgang Groos at the premiere of "Hilfe, ich hab meine Lehrerin geschrumpft" in Cologne on December 6, 2015

Wolfgang Groos was born in Kassel on April 22 1968. He studied production at the Deutschen Film- und Fernsehakademie Berlin (dffb), and graduated in 2003. Already during his student years, he worked in several functions in film production, and was an assistant director on such films as Matthias Glasner's "Fandango" (2000), Dominik Graf's "Der Felsen" (2002) and Tomy Wigand's "Das fliegende Klassenzimmer" (2003). His debut short "Wenn zwei sich streiten" (2004) won the Critic's Prize at the Mexico International Film Festival. From 2005 on, Groos worked as a director for TV productions, and in 2009, he presented his first feature film "Hangtime – Kein leichtes Spiel". The following year, he completed his second feature with "Vorstadtkrokodile 3".

Two years later, "Die Vampirschwestern", the story of two vampire teen girls who move with their parents from Transylvania to a small town in Germany, was released.

The musical teen movie "Systemfehler – Wenn Inge tanzt" (2013) deals with friendship, prejudice and peer pressure: In it, an upcoming musician is forced to invite an unpopular yet highly talented girl from his school into his band.

This film, a big box office success, earned Groos a nomination at the Deutscher Filmpreis in the category Best Children's and Youth film. Despite good reviews, his next children's film "Robbi, Tobbi und das Fliewatüüt" (DE/BE 2016) based on the children's book of the same name by James Krüss, was less successful with the audience. In November 2017, "Hexe Lilli rettet Weihnachten" ("Lilly the Witch Saves Christmas"), the third film about the adventures of a young witch, had its theatrical release in Germany.