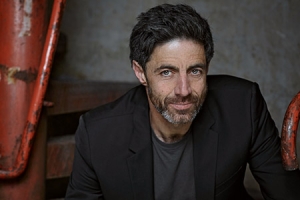 Christian Lerch was born in Wasserburg am Inn on March 6 1966. After studying acting in Graz, he performed at the Staatstheater Braunschweig, the Kammerspiele in Munich and at the Bayerische Staatsschauspiel. He soon began to venture into television as well, with roles in TV shows like "Café Meineid", "Soko 5113", "Rosenheim-Cops" and "München 7". He also appeared in feature films by Herbert Achternbusch ("Ich bin da, ich bin da"), Peter Sehr ("Obsession") and Xaver Schwarzenberger ("Andreas Hofer – Die Freiheit des Adlers").

In addition to his acting career, Christian Lerch also is a writer. He co-authored the documentary "Oskar Sala – Die vergangene Zukunft des Klangs" and wrote (and also directed) the short Kurzfilm "Bulldog" (1997). He also contributed scripts for "Meineid", and together with Marcus H. Rosenmüller, he-wrote the screenplay for the 2007 comedy "Wer früher stirbt, ist länger tot" ("Grave Decisions"), which was nominated for a German Film Award.

Lerch subsequently co-authored the scripts for Rosenmüller's feature films "Die Perlmutterfarbe" ("Little White Lies") and "Räuber Kneißl" in which he – like in "Sommer der Gaukler" – also appeared as an actor. He eventually made his debut as director with the comedy "Was weg is, is weg" (2012).

As an actor, he had supporting roles in "Wer hat Angst vorm weißen Mann?" (2013, TV) and "Schluß! Aus! Amen!". He remaines a regular cast member in "München 7", for which also contributed the script to the 2014 episode "Letzte Hoffnung München". The same year, he joined the writing team of the children's film "Rico, Oskar und die Tieferschatten" ("The Pasta Detectives"). Moreover, he guest-starred on numerous TV shows, including "SOKO München", "Hubert und Staller" and "Um Himmels Willen".

Between 2016 and 2017, Christian Lerch directed the web documentary series "B12 - Auf der Suche nach dem Sinn des Lebens", which was streamed on the website of the network Bayerische Rundfunk. The series about the patrons of a roadhouse in Bavaria became the basis for his second feature-length film "B12 - Gestorben wird im nächsten Leben", which premiered at the 2018 DOKfest in Munich and was released theatrically in July 2018.