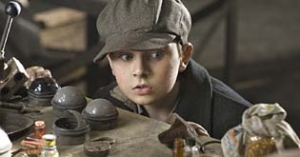 Alexander would love to win the drawing competition at his school to impress fellow pupil Lotto, with whom he is in love. After school he likes best of all to spend his time with a few classmates, who include, apart from Lotte, his best friend, the nerdy inventor Mole. When he accidentally gets hold of Mole's latest invention, a mysterious, glowing mother-of-pearl paint, his life starts to come apart at the seams. The entire class starts searching for the alleged thief of the paint, but instead of telling the truth, Alexander takes recourse to a white lie. Gruber, a disagreeable classmate, covers up the lie for Alexander and now abuses the boy′s dependence for his own purposes. He cleverly diverts the suspicion to the rival parallel class and launches a malicious campaign against them. Alexander becomes embogged in a web of deceit and withdraws more and more from Mole and his friends, while Gruber deviously plays off the classes against one another…

Set in 1931, the story of young Alexander who gets entangled in his own guilt due to a minor fib out of vanity plays – like all of Marcus Rosenmüller's films – in Bavaria. The screenplay is based on the novel of the same name by Anna Maria Jokl, who captured the mounting danger of National Socialism before she had to flee from Berlin in 1933.