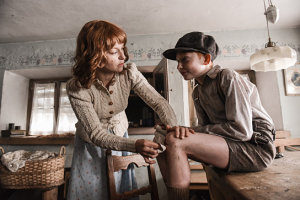 Germany, spring 1945: Anna, a woman from Munich, flees the bombed city to the countryside with her eleven-year-old son Felix. They find a new home on the estate of a deceased aunt. There Felix discovers a wonderful place directly underneath the attic: a magically sparkling, mysterious "glass room" in which he can play and escape the dreary reality of war. At the same time he finds a new friend, Karri, the son of the local group leader Feik. Like his father, Karri is a convinced Nazi who firmly believes in the "ultimate victory" - quite different from Felix and his mother, who above all feel disgust for the Nazi ideology. Nevertheless, Felix gets more and more caught up in the Nazi propaganda, also because he is proud of his father fighting at the front. One night, when the latter turns up completely unexpectedly, Felix starts having second thoughts - because apparently his father has deserted.