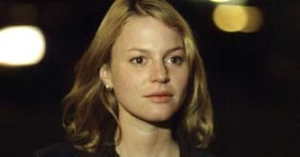 Maria Simon, born 1976 in Leipzig, is the sister of actress Susanna Simon. She grew up in the GDR but went to New York in 1990 to stay with her father, a computer expert at the United Nations. After finishing school, Simon attended actor"s training at Schauspielschule Ernst Busch in Berlin and got her diploma in 1999. In the same year, she made her movie debut in "Zornige Küsse" ("Angry Kisses"), a role that won her the award as best actress at the Moscow film festival. Simon then made her breakthrough in 2003 as the sister of Daniel Brühl in the worldwide success "Good Bye, Lenin!", and as a translator in Hans Christian Schmid"s highly praised drama "Lichter" (Distant Lights").

She also attracted a lot of attention with her portrayal of a reporter in the TV movie "Carola Stern – Doppelleben". In 2004, Maria Simon was named a "European Shooting Star". In 2007, Simon starred in her first leading role in a movie in the ensemble movie "Nichts als Gespenster" ("Nohing But Ghosts"), alongside her co-star from "Lichter", August Diehl.