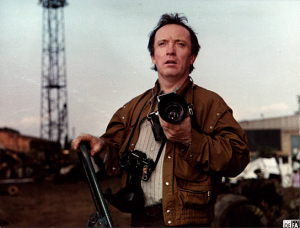 Peter Sodann, born in Meißen on June 1, 1936, first trained as a toolmaker, briefly studied law, and only then took up studies at the Theaterhochschule in Leipzig in 1959. In 1961 - while still a student - he was arrested as head of the cabaret "Rat der Spötter" (Council of Mockers) for "anti-state agitation" and sentenced to two years in prison, which was later commuted to 4 years probation.

After his release from prison, Sodann continued his studies in Leipzig. In 1964 he graduated and joined the Berliner Ensemble, and in 1966 transferred to the Städtische Bühnen Erfurt, where he worked for five years. He began his work as a director at the Städtisches Theater Karl-Marx-Stadt in 1971 and continued it as acting director in Magdeburg from 1975.

In 1980 Sodann changed his place of work again and went to Halle, where he first became acting director of the then Landestheater and then founded the "neues theater", of which he was the artistic director until 2005. As the founder of Halle's "Kulturinsel," which in addition to the theater also houses a cabaret, a library and a literary café, and for his social services, he was awarded honorary citizenship of the city of Halle in 2006.

In addition to his theater work, Peter Sodann has also been active as an actor for film and television from the 1970s. Before the fall of the Berlin Wall, he appeared in a whole series of smaller and larger supporting roles in GDR TV films, as well as in DEFA feature film productions. He was often seen in more paternal and positively connoted roles, for example in Helmut Dziuba's 1984 socio-critical youth film "Erscheinen Pflicht" in which he gave a multi-layered portrayal of a Russian language teacher, or in the mistaken identity and romantic comedy "Der Doppelgänger" (1985) as the former boyfriend of the female lead character, whose marriage he tries to save with a cunning idea. In Bernhard Wicki's TV movie "Sansibar oder der letzte Grund" (DD/DE/CH, 1987) he also appeared as a teacher. A year earlier, in "Der Hut des Brigadiers" ("The Brigadier's Hat"), a drama set in a working-class milieu and rather critical of the system for its time, he played the role of a respected brigadier who suffers a fatal accident and whose position is subsequently taken over by the film's main character.

Peter Sodann became known to a wider audience after the fall of the Wall, when he took on the role of Chief Inspector Bruno Ehrlicher in 1991. He played the investigator in 45 films of the "Tatort" series until the end of 2007. In between, he also appeared in various TV series such as "Tanja" and "Sterne des Südens" as well as in several other TV films.

In 2006, he was back on the big screen after a long time: As a pub landlord, he had a major supporting role in Matthias Keilich's comedy "Die Könige der Nutzholzgewinnung," ("Lumber Kings") in which the likeable loser Krischan (Bjarne Mädel) wants to breathe new life into his lethargic home village with a lumberjack competition.

After making his last appearance in the "Tatort" series in 2007 as Chief Inspector Ehrlicher under the direction of Hajo Gies in "Die Falle," he was seen from 2008 to 2013 in the recurring role as the head of the school district and head of a museum association in 27 episodes of the youth series "Schloss Einstein."

In 2009 Sodann caused a stir away from the film and theater scene on the political stage: His candidacy for the office of Federal President as a candidate of the left-wing party Die Linke met with rejection from various established politicians of other parties, because Sodann had previously caused outrage with, among other things, controversial statements on the alleged lack of democracy in Germany. In the election of the Federal Assembly, he ended up far behind in third place with just over seven percent of the vote.

After that, in addition to his series appearances, he played supporting roles in further TV productions, including Christian Schwochow's two-part novel adaptation "Der Turm" ("The Tower", 2012) about the Stasi entanglements of a family of Dresden's middle class.

In 2018, Sodann made a minor appearance as an open-pit mining veteran in Andreas Dresen's award-winning film biopic "Gundermann," about the GDR singer-songwriter and excavator driver of the same name.

In addition to his work as an actor, Sodann repeatedly worked as a narrator of audio books, especially of Karl May novels.

One of his main passions are the collection of books which were published between 1945 and 1990 in the Soviet Occupation Zone and the GDR by over 250 East German publishers. In 2012 he opened the Peter Sodann Library in Straucha near Meißen, and in 2020 the "Bücherkiste Peter Sodann" in Magdeburg, in each of which he has made parts of his very extensive collection accessible.

Over the years, Sodann has received the Federal Cross of Merit, 1st class, in addition to honorary citizenship of the city of Halle for his social and cultural commitment. He was also appointed honorary commissioner by the Saxon police. In 2008, his autobiography "Keine halben Sachen" was published by Ullstein-Verlag.