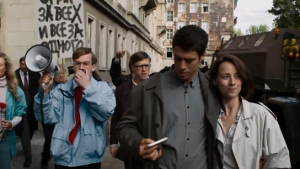 The film opens during the 1991 coup of the Soviet Union as communist hardliners try to oust Gorbachev from power. Pyotr Voyd, a young gangster, awakes in the notorious prison of Lubyanka, captured by the KGB. During the interrogation process, he loses his memory and believes that he is a Russian revolutionary poet in 1919 where he joins the real-life Red Army hero Vasily Chapayev and his sidekick machine-gunner Anna. Soon, Pyotr is on the run simultaneously in the Moscow of 1991’s gangster capitalism and in the Ural Mountains of precarious post-revolutionary 1919. Two revolutions can’t exist in one man’s head at the same time for very long!