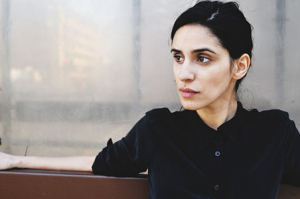 Maryam Zaree was born on 22 July 1983 in Tehran, Iran. She was born in Evin Prison, where her mother was imprisoned for political reasons. In 1985 mother and daughter fled to Germany; they settled in Frankfurt, where Zaree's mother Nargess Eskandari-Grünberg made a career as a local politician for the Green party Bündnis 90/Die Grünen.

From 2004 to 2008 Zaree studied acting at the Film and Television Academy 'Konrad Wolf' in Potsdam-Babelsberg. During this time, she appeared in several short films and received an honorable mention at the Kassel Film Festival for her role in the short film "Herbstzeitlose" (2004). Zaree also played her first feature film roles as a student: in the ensemble of the Berlin city fairy tale "Mein Vogel fliegt schneller" (2007-2009) and in the Swiss production "Suicide Hill" (2008), about a group of suicidal young people.

Maryam Zaree's breakthrough came with the leading role in Burhan Qurbani's feature film "Shahada" (2009), which premiered in the Competition of the Berlinale 2010. In the drama about three young Muslims in Berlin she played the western-oriented daughter of a liberal Turkish imam who becomes a strict believer after an abortion, which leads to conflicts with her father. "Shahada" was screened at a number of international festivals and received several awards. Zaree won a prize for her performance at the Monterrey Film Festival in Mexico and received a Special Mention at the International Film Festival in Ghent, Belgium.

The social drama "Abgebrannt" ("Burnout", 2010), about a single German-Turkish woman (Zaree) in Berlin, who despite all efforts is in danger of drifting more and more into poverty, also received very good reviews and several awards. Zaree has had important television roles, among others as a drug courier in Andreas Kleinert's "Tatort" episode "Fette Hunde" (2012), as the threatened sister of a gangster in Matti Geschonneck's "Tod einer Polizistin" (2012) and as a key witness in a drug ring in Lars Becker's thriller "Unter Feinden" (2013).

On the big screen she was seen in the ensemble tragicomedy "Willkommen bei Habib" ("Habib Rhapsody", 2013) as the wife of a faithless prowler, in a leading double role in the Istanbul-based crime thriller "I Am Not Him" (TR/GR/DE/FR 2013) and in the Belgian refugee drama "Le chant des hommes" (2015). In the comedy "Marry Me!" (2015) she played a German-Indian woman who lives with her little daughter in Kreuzberg and who gets a surprise visit from her old-fashioned grandmother from India.

On TV, she played the recurring role of forensic scientist Nasrin Reza in the Berlin episodes of the popular "Tatort" series from 2015 to 2019. For the social drama "Club Europa" (2017, TV), about a flat sharers who want to help their roommate who is threatened with deportation, Zaree received the Exberliner Film Award at the Achtung Berlin Festival together with the film team. In the series "4 Blocks" (2017-2018) she plays a leading role as the wife of a Berlin clan leader (Kida Khodr Ramadan) who wants to get out of the criminal milieu.

In addition to her work for TV and film, Zaree has also been appearing on stage. She gave guest performances at the Ballhaus Naunynstraße (2012-2015) and the Maxim Gorki Theater (2016-2018), among others. For her first own play "Kluge Gefühle" she won the Heidelberger Stückemarkt Author's Prize in 2017.

Christian Petzold cast her in his Anna Seghers adaptation "Transit" (2018) as the widow of a German fugitive in Marseille. Shortly afterwards, under Petzold's direction, she played the investigator Nadja Micoud, the new and ambitious colleague of the Munich commissioner Hanns von Meuffels, in the "Polizeiruf 110" episode "Tatorte" (2018). With these parts Petzold also seemed to set the course for Zaree to be less stereotypically cast as a woman from the middle East.

In 2019 Zaree was seen in the successful film "Systemsprenger" ("System Crasher") in a leading role as Elli, wife of the social worker Micha (Albrecht Schuch). The film celebrated its premiere in the Competition of the Berlinale. At the same festival, Zaree presented her directorial debut in the Perspektive Deutsches Kino section, the documentary film "Born in Evin". In the film she explores her Iranian origins, in particular the background of her own birth in 1983 in the political prison of Evin. At the Berlinale the film won the Kompass-Perspektive-Preis, at the Hessian Film Prize 2019 Zaree received the Newcomer Award. At the Five Lakes Film Festival 2019 and the German Film Prize 2020, "Born in Evin" was awarded Best Documentary Film.

Maryam Zaree was then seen as an actress in the university satire "Weitermachen Sanssouci" ("Music and Apocalypse", 2019) as a management consultant, in Christian Klandt's pub milieu study "Leif in Concert - Vol. 2" (2019) as a slam poet, and in Christian Petzold's love story "Undine" (2020) as Monika, colleague and good friend of Franz Rogowski's industrial diver.