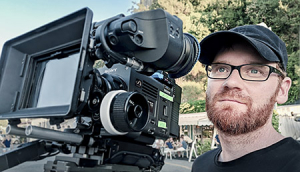 Thomas Eirich-Schneider was born in Pirna 1984. In 2004, he moved to Berlin, where he completed an internship at Ö Filmproduktion. He then began studying TV production at the Dekra Media Academy in Berlin and started working for X Filme Creative Pool. After graduating with a bachelor's degree in 2007 and spending time as an assistant production manager at X Filme, Eirich-Schneider decided to change his career from production to cinematography. He first worked as a cameraman on various commercials and music videos.

From 2009 to 2014, he completed a diploma in camera studies at the University of Film and Television 'Konrad Wolf' in Potsdam-Babelsberg. During these years, Eirich-Schneider was a cameraman on numerous short films and acted as camera assistant on the feature films "Sein letztes Rennen" ("Back on Track", 2013), "Beltracchi - Die Kunst der Fälschung" ("Beltracchi: The Art of Forgery", 2014) and "Über-Ich und Du" ("Superegos", 2014), among others.

Thomas Eirich-Schneider's focus as a cinematographer is on documentaries, covering a remarkable range of topics. His works include the Paralymics athlete portrait "Gold - Du kannst mehr als Du denkst" ("Gold: You Can Do More Than You Think", 2013) and the political documentaries "Verliebt, verlobt, verloren" (2015) and "Meine Brüder und Schwestern im Norden" ("My Brothers and Sisters in the North", 2016), the latter two directed by Sung-Hyung Cho.

Together with Robert Laatz, he formed the camera duo on the animated documentary "1917 - Der wahre Oktober" ("1917: the Real October", DE/CH 2017). For television, he made the documentaries "Schlagerland" (2017) by Arne Birkenstock and "Dieses bunte Deutschland" by Jan Tenhaven. In addition, Eirich-Schneider has been a cinematographer on numerous commercials (including for Goodyear), music videos (including for The Hidden Cameras) and image films (including for Nespresso) over the years.

In addition to his work as a cinematographer, Thomas Eirich-Schneider leads workshops on image design, camera work and camera techniques for children, youth and refugees. He is also a lecturer at the Kinderfilmuni of the Filmuniversität Babelsberg 'Konrad Wolf'.