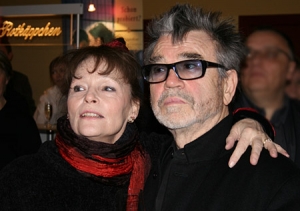 Angelica Domröse and Hilmar Thate at the PROGRESS-brunch at the IFF Berlin on February 12, 2006

Hilmar Thate, born April 17, 1931, in Dölau near Halle an der Saale as the son of a locksmith and a housewife, started to attend actor's training in Halle in 1947. From 1949 on, he performed at Theater Cottbus before he went to Berlin in 1952 where he started out at Theater der Freundschaft, and later went to Maxim Gorki Theater. From 1959 to 1970, Thate was a cast member of Berliner Ensemble, and from 1971 to 1979 he was employed at Deutsches Theater. His most important roles include Bertolt Brecht's Jean Cabet in "Die Tage der Kommune" (1962) and Givola in "Der aufhaltsame Aufstieg des Arturo Ui" ("The Resistable Rise of Arturo Ui", 1959), as well as Shakespeare's "Richard III." (1972). Thate's energetic performances polarized critics. Thus, he often received fulsome praise as well as harsh criticism for the same performance.

Thate started his movie career in the mid-1950s. He made his debut in Konrad Wolf's graduation film "Einmal ist keinmal" (1955) and subsequently starred in "Leute mit Flügeln" (1960), "Professor Mamlock" (1961), and "Der geteilte Himmel" ("The Divided Heaven", 1964). Thate also played key supporting roles in Kurt Maetzig's film "Das Lied der Matrosen" (1958), and in "Der Fall Gleiwitz" ("The Gleiwitz Case", 1961), directed by Gerhard Klein. But he did not play his first leading role in a movie until 1974 when he played the role of Eduard in Siegfried Kühn's adaptation of Goethe's novel "Die Wahlverwandtschaften" (Elective Affinities").

During this time, Thate also made his breakthrough on TV. In 1976, he got the title role in the five-part series "Daniel Druskat" as the friend and fierce rival of Manfred Krug. Thate won the GDR's national award for his performance in this rural drama from the early years of GDR history. Furthermore, Thate made a brilliant performance in Kühn's feature film "Don Juan, Karl-Liebknecht-Str. 78" as a driven opera director who not only directs "Don Giovanni" on stage but also in his own life.

In 1976, Thate was one of the first to support a petition against the expatriation of Wolf Biermann. Furthermore, he conformed less and less to GDR cultural politics. Thus, he migrated to West Germany with his wife Angelica Domröse in 1980 and continued his successful theatre career. He performed at theatres in West Berlin, Bochum, Stuttgart, Munich, Vienna, and Salzburg. He made a brilliant performance alongside his wife in a 1998 production of "Stalin" by Gaston Salvatore, directed by George Tabori, as well as in a 1995 production of "Don Juan", directed by Ingmar Bergman.

Thate was highly praised for his performance in Andreas Kleinert's "Wege in die Nacht" ("Paths in the Night", 1999). He starred as Walter, who had been a successful citizen of the GDR but is not able to cope with unemployment in reunified Germany. Thus, he roams through Berlin at night to enforce law and order. Thate won the Grimme award and the Best actor award at the Karlovy film festival for this role. Furthermore, he won a German TV award and a Bavarian TV award for his role as Richard Wolf, the head of the Federal Crime Police Office, in the TV movie "Operation Rubikon" (2002). In his last cinematic performances, Thate was seen as bishop in Volker Schlöndorff's" Der neunte Tag" ("The Ninth Day", 2004) and as a composer in Jutta Brückner's "Hitlerkantate" ("Hitler Cantata", 2005).