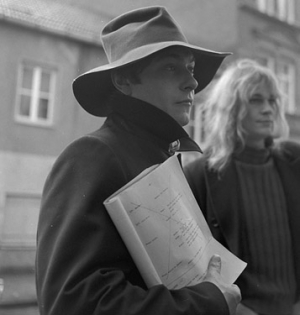 Kurt Raab was born July 20, 1941, in Bergreichenstein, Bohemia. At Straubing's Musisches Gymnasium, he met Wilhelm Rabenauer (Peer Raben). After finishing high school, they both went to Munich where Raab started to study German studies and history and worked for TV productions, for instance, as a prop master for ZDF television. In 1966, he became a teller at action-theater and played his first role in Raben's "Antigone" adaptation.

In 1968, Raab co-founded "antiteater", subsequently performed in numerous productions by Fassbinder and participated as a writer and director. Raab played his first big role in a film in "Warum läuft Herr R. Amok?" ("Why Does Herr R. Run Amok?"). Besides his work at theatre, he participated in all of Fassbinder's film productions until 1977. He wrote a first draft of the screenplay to "Mutter Küsters Fahrt zum Himmel" ("Mother Kuster's Trip to Heaven") and was a successful actor and production designer: In 1971, he won the German film award for his production design of "Whity".

In Ulli Lommel's film "Die Zärtlichkeit der Wölfe" ("Tenderness of the Wolves") – that was based on a screenplay by Raab – he played the mass murderer Haarmann. Furthermore, he appeared in films by Reinhard Hauff, Herbert Achternbusch, and Michael Fengler.

After his collaboration with Fassbinder ended, Raab performed at theatres in Bochum, Munich, and Hamburg, and continued his movie and TV career. Raab, who contracted AIDS in the 1980s, thematized his experiences with his illness in the TV documentary film "Mitten im Leben" and in other projects.