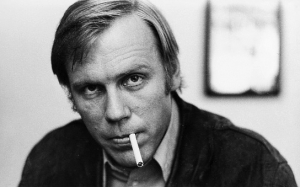 Michael Fengler was born on November 14, 1940 in Königsberg in what was then East Prussia (now Kaliningrad, Northwest Russia). From 1960 he studied art history, Romance and German language and literature in Bonn and Munich. From 1964 to 1966 he was director of the student film club in Munich. During this time, in 1965, he made the TV documentary "In einem Ort wie Weinheim" together with his brother Thomas on behalf of the Institut für Film und Bild (FWU), but it was not broadcast until 1974. Also in 1965 he translated a collection of essays by Julien Gracq, together with Liselotte Eder, Rainer Werner Fassbinder's mother. Through her, Fengler met the then still unknown filmmaker - the beginning of a long-running collaboration. In Fassbinder's short film "Der Stadtstreicher" ("The City Tramp", 1966), Fengler was actor, sound designer, co-editor and (uncredited) cameraman; for "Das kleine Chaos" ("The Little Chaos", 1967) he was director of photography.

After his graduation in 1969 Fengler was Fassbinder's assistant director for "Katzelmacher" and co-director of "Götter der Pest" ("Gods of the Plague", both 1969), which he also produced, and for "Die Niklashauser Fahrt" ("The Niklashausen Journey", 1970), which he co-wrote and in which he also acted. The first film he directed by himself was "Weg vom Fenster" in 1970, about the social decline of two foster children. The production's cast and crew came partly from what is known as the "Fassbinder family", among them actor Kurt Raab and cameraman Dietrich Lohmann. A great success was the social drama "Warum läuft Herr R. Amok? ("Why Does Herr R. Run Amok?", 1971), which Fengler wrote, directed and edited together with Fassbinder, and for which the two were awarded the German Film Prize.

In 1971 Michael Fengler was co-founder and until 1974 managing director of Filmverlag der Autoren, whose aim was to organize the production, rights exploitation and distribution of their own films as a kind of collective. After leaving the company, he founded the production company Albatros in 1974, with which he also realized his directorial feature film debut, the crime film "Output" (1974). Fengler's third and last directorial work was the milieu and character study "Eierdiebe" ("Petty Thieves", 1976), about two unsuccessful Frankfurt petty crooks, played by Marquard Bohm and Charly Wierczejewski, the latter of which had achieved fame through his role in Roland Klick's cult film "Supermarkt" (1974).

With Albatros, Fengler produced the Fassbinder films "Satansbraten" ("Satan’s Brew", 1976), "Chinesisches Roulette" ("Chinese Roulette", 1976) and "Die Ehe der Maria Braun" ("The Marriage of Maria Braun", 1978), as well as Uli Lommel's "Adolf und Marlene" ("Adolf and Marlene", 1976). For "Die Ehe der Maria Braun" (1978) he won his second German Film Prize (Production), while Fassbinder won Best Director. The film was also a great box office success and gained a lot of international recognition. However, a bitter irony of their joint success was that Fengler and Fassbinder fell out with each other during the shooting and ended their collaboration.

In the following years, Fengler produced the films of a director who was similarly unconventional as Fassbinder: Klaus Lemke. Among their collaborations were the bizarre Bavarian comedies "Ein komischer Heiliger" ("Some Kind of Saint", 1978), "Arabische Nächte" ("Arabian Nights", 1979) and "Flitterwochen" ("Honeymoon", 1980), all starring Wolfgang Fierek and Cleo Kretschmer.

In the mid-1990s he returned to television as a screenwriter, mostly in collaboration with Margot Rothkirch. They wrote the scripts for the thriller "Angst" (1995), the thriller "Der Weihnachtsmörder" (1997) with Thekla Carola Wied and the "Polizeiruf 110" episode "La Paloma" (2000). Michael Fengler's last works as a screenwriter were Matthias Glasner's thriller "Das Staatsgeheimnis" ("High Score", 2001, TV) and the "Polizeiruf 110" episode "Fliegende Holländer" (2001, without Rothkirch).