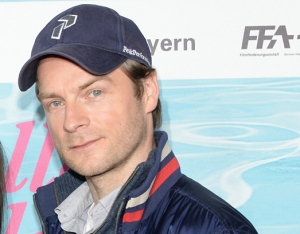 Hinnerk Schönemann at the world premiere of "alles inklusive" in Munich, February 24, 2014

Hinnerk Schönemann, born 1974, attended actor's training at Berlin's Hochschule der Künste and won Potsdam's solo sponsorship award for drama students. He then became a cast member at Hamburg's Thalia Theater from 2001 to 2003. At the same time, Schönemann made his movie debut in 2001 in a leading role in Sven Taddicken's award-winning film "Mein Bruder der Vampir" ("Getting My Brother Laid") and has subsequently been seen regularly in German movie and TV productions such as Taddicken's second movie "Emmas Glück" ("Emma's Bliss", 2006), as well as in "Kroko" (2003) und "Hab mich lieb!" (2005), both by Sylke Enders.

Schönemann's part in "Kroko" won him a nomination for best supporting actor at the German film prize. In 2004, he won the special prize at the TV movie festival Baden-Baden for his role in Hermine Huntgeburth's "Der Boxer und die Friseuse". In 2007, Schönemann was seen in a leading role in Christian Petzold's "Yella" that took part in the Berlinale competition.

Subsequently, Schönemann became a popular TV presence, mainly thanks to his dead-on portrayals of police officers: He played a struggling cop in the comedy series "Dr. Psycho - Die Bösen, die Bullen, meine Frau und ich" (2007-2008), the sidekick of the titular inspector "Marie Brand", and more law enforcers in "Wolfsfährte" (2010) and "Blutadler" (2011). The made-for-TV thriller "Mörderisches Wespenenest" (2011) introduced audiences to the character Finn Zehender, an unconventional private eye. Finn Zehender became a highly successful role for Schönemann, who reprised it for three more films. "Mörder auf Amrum" saw him as an island policeman who has to protect a witness from the Russian mafia. His performance garnered him a nomination for the 2010 German Television Award, and along with screenwriter Holger Karsten Schmidt and director Markus Imboden, Schönemann won the Grimme Award for the film.

Among his movie credits were the part of pirate Keule in Sven Taddicken's adventure romp "12 Meter ohne Kopf" ("13 Paces Without a Head", 2009) and the role of the sheriff in "Tom Sawyer" and "Die Abenteuer des Huck Finn" ("The Adventures of Huck Finn", 2012). In 2011, he had a memorable turn as a German soldier in Steven Spielberg's WWI epic "War Horse". Casting against type, director Doris Dörrie had Hinnerk Schönemann playing a transvestite in her tragicomedy "alles inklusive", which was released in March 2013.