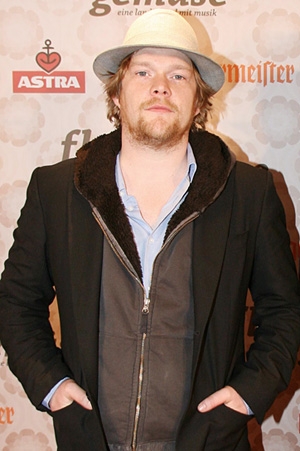 At the premiere of "Fleisch ist mein Gemüse" in Hamburg on April 8, 2008

Oliver Bröcker was born on May 11 1977 in Berlin. At the age of twelve, he auditioned and was cast for Wolfgang Becker's acclaimed drama "Kinderspiele" ("Child's Play", 1992). His memorable performance immediately led to more offers, and in the following years, Bröcker became a fixture on television. His credits include the youth program "Die Stadtindianer" (1994), the remake "Die Halbstarken" (1996, TV) and the drama "Zehn wahnsinnige Tage" (1999). The latter garnered Bröcker a nomination as best Supporting Actor at the German Film Awards.

After a supporting role in the theatrical release "Die Einsamkeit der Krokodile" ("The Loneliness of the Crocodiles", 2000), he received a nomination for the German Television Award for his portrayal of a small town police officer who gets transferred to an inner city district in the crime drama "Mit dem Rücken zur Wand" (2002).

On the big screen, Bröcker mostly appeared in poignant supporting roles, including parts in "Verschwende deine Jugend" ("Play It Loud!", 2003), "Kleinruppin Forever" (2004), "Die fetten Jahre sind vorbei" ("The Edukators", 2004) and "NVA". Moreover, he played a band musician in the bestseller adaptation "Fleisch ist mein Gemüse" ("Krauts, Doubts & Rock 'n' Roll", 2008), the best friend of a Parkinson patient in the drama "Liebeslied" (2008), and a pirate in the swashbuckling adventure "Zwölf Meter ohne Kopf" ("12 Paces Without a Head", 2009).

Bröcker got very positive reviews for his portrayal of a love-struck heavy metal fan in the musical comedy "Dear Courtney", as well as for his performance as a young police officer in the award-winning coming-out drama "Freier Fall" ("Free Fall", 2013). He again played a cop in the 2015 satire "Heil", in which his character is suspended form service and takes on a group of Neo-Nazis.