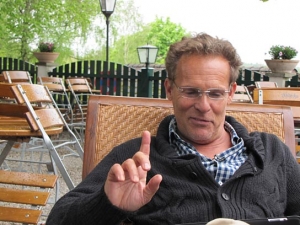 Christian Tramitz was born in Munich on July 25th 1955. He first studied violin at the Munich music conservatory, before enrolling in art history, philosophy and theatre at Munich University. After his graduation, he took acting classes with Ruth von Zerberoi and got his first engagement at the Ingolstadt theatre. Following numerous theatre tours, he became an ensemble member at the Düsseldorfer Kammerspiele.

In the 1980s, he started working in film as a voice talent for dubbed versions. To this day, he has lent his voice to artists like John Cusack, Jackie Chan, Ben Stiller and Matt Dillon.

After acting in a few supporting roles in German TV programmes, Tramitz became popular as one of leads in Michael "Bully" Herbig's award-winning TV comedy series "Bullyparade" (1997-2002). His had his breakthrough as the lone ranger in Herbig's western spoof "Der Schuh des Manitu" ("Manitou's Shoe"), which went on to become one of the highest-grossing films in German film history, won a slew of awards and started a wave of screen comedies – which also benefited Tramitz' movie career: He had parts in successful comedies like "(T)Raumschiff Surprise – Periode 1" ("Dreamship Surprise - Period 1"), "7 Zwerge – Männer allein im Wald" ("7 Dwarves") and "Neues vom Wixxer".

Tramitz was the male lead in the comedy "3faltig" (DE/AT 2010). After guest-starring roles in the TV series "Notruf Hafenkante" and "Die Gipfelzipfler", he became one of the leads in the TV series "Hubert und Staller". His other TV credits include "Stankowskis Millionen" (2011, TV) and "Hansi und Hubsi" (2012, TV).

2017 saw the release of the feature film "Bullyparade - Der Film" ("Bullyparade – The Movie"), for which Michael Herbig, Rick Kavanian and Christian Tramitz revisited their most iconic characters from the popular TV show.