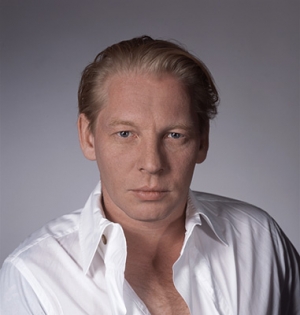 Ben Becker was born December 18, 1964, in Bremen, as the son of actors Monika Hansen and Rolf Becker. When his parents separated, he and his sister Meret Becker grew up with their mother and her new partner Otto Sander in Berlin. Ben took part in radio plays already as a child and made his movie debut in 1983 at the side of his step-father Otto Sander in the drama "Eine Liebe in Deutschland" ("A Love in Germany").

During the mid-1980s, Becker worked as a stagehand at Berlin's Schaubühne and also took acting lessons from 1985 to 1987. He then appeared regularly in supporting roles in TV series such as "TKKG", "Der Alte" ("The Old Fox") or "Ein Fall für zwei", as well as in TV movies such as Alfred Weidenmann's "Ein ganz gewöhnlicher Mord". In 1991, Becker caused a stir with his performance as a German tourist who reacts to his holiday love's pregnancy with great arrogance in Peter Sehr's romantic drama "Das serbische Mädchen" ("The Serbian Girl"). In the same year, Becker won the Silver Grimme award for his performance in Bernd Böhlich's TV movie "Landschaft mit Dornen".

During the 1990s, Becker was a cast member of Hamburg's Ernst-Deutsch-Theater but also performed at Stuttgart's Staatstheater (1991/92) and at Hamburg's Schauspielhaus (1993/94) in classic plays such as "Kabale und Liebe" or "Romeo and Juliet". In 1995, he staged his own play "Sid & Nancy" with Meret Becker in the leading role. Until today, Ben Becker regularly performs on stage. In 1999, Becker was highly praised for his performance in "Berlin Alexanderplatz" at Berlin's Maxim Gorki Theater. Furthermore, he participated in an audio book of the play in 2005 and then went on an nation-wide tour with the play's stage version.

In 1994, Ben Becker made his breakthrough performance as a movie actor in Joseph Vilsmaier's "Schlafes Bruder" ("Brother of Sleep"). Although the film did not go too well with critics, Becker's powerful acting performance was nevertheless praised by many film critics. In the same year, Becker won his second Grimme award, this time for his part in the episode "Totes Gleis" of the TV crime series "Polizeiruf 110". In the TV season 1996/97, Becker also played inspector Günter Bommel in the crime series "Friedemann Brix".

In 1997, Becker celebrated another great movie success with the historical drama "Comedian Harmonists", again directed by Joseph Vilsmaier. The film's ensemble of actors won a special award at the 1998 Bavarian film awards. Furthermore, Becker won a "Goldene Kamera" for his portrayal of Robert Biberti.

In the following years, Becker consolidated his reputation as an overly temperamental, yet highly sensitive character actor with an exceptional presence on screen as well as on the stage in several films and TV movies such as "Gloomy Sunday", "Frau2 sucht Happyend" ("Female2 Seeks HappyEnd"), and "Ein ganz gewöhnlicher Jude". In private, Becker occasionally cultivates his image as a rebellious "enfant terrible" and hits the yellow press headlines with minor scandals.

Most recently, Ben Becker, who also performs as a musician, was seen as mean fishmonger Karaman in the film version of the children's book classic "Die rote Zora" ("Red Zora"). With his programme "Die Bibel - Eine gesprochene Symphonie", combining readings of the bible with music, he tours through Germany in 2008/2009 together with his "Zero Tolerance Band" and Deutsches Filmorchester Babelsberg.