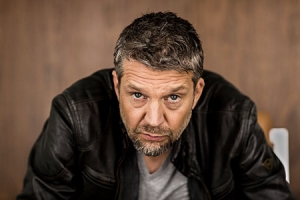 Kai Wiesinger, born April 16, 1966, in Hannover, was encouraged by his parents to take private acting lessons at Hannoveraner Schauspielhaus already at an early age. After finishing school, he studied acting at Munich's Otto Falckenberg school. In 1990, Wiesinger made his stage debut in a production of "Harold and Maude". After playing several roles at the theatre, Wiesinger managed to switch to the big screen already two years later when he landed a leading role in Sönke Wortmann's friendship comedy "Kleine Haie" ("Acting It Out"). The film became a big success with critics and moviegoers alike and won Wiesinger the Bavarian film award.

After his surprising breakthrough performance in his debut movie, Wiesinger played leading roles in a series of successful German films in the following years, including Sherry Horman's "Frauen sind was Wunderbares" (1994) and Rainer Kaufmann's "Stadtgespräch" ("Talk of the Town", 1996). Furthermore, he also starred in international productions like the British music film "Backbeat" (1994) or in an episode of "The Young Indiana Jones Chronicles" (1993).

With Roland Suso Richter's highly praised thriller "14 Tage lebenslänglich" ("14 Days to Life", 1996), Wiesinger managed to break away from his image as a nice gentleman and won another Bavarian film award for his portrayal of a cynic lawyer who is sent to prison despite being innocent. Wiesinger then continued to star in ambitious productions and played leading roles in the bulimia drama "Hunger" ("Hunger - Addicted to Love", 1997) and in the historic ensemble film "Comedian Harmonists" (1998), that won a special award at the Bavaria film awards. In 1998, Wiesinger caused a stir in the controversial drama "Nichts als die Wahrheit" ("After the Truth"), directed by Roland Suso Richter. In this (fictional) story, he played a lawyer who legally represents the concentration camp physician Mengele (played by Götz George), who is still alive.

From 2003 on, Wiesinger has mainly appeared in TV productions, including leading roles in ambitious and successful films such as Lars Jessen's "Zwei gegen Zwei" (2005), Roland Suso Richter's war-time drama "Dresden" (2006), and Joseph Vilsmaier's refugee drama "Die Gustloff" (2008), as well as the romantic comedy "Liebe nach Rezept" (2007), where Wiesinger starred alongside Uwe Ochsenknecht. His first TV series flopped, though. The RTL TV series "Die Anwälte" (2008) was already cancelled after the pilot episode was shown.

In 2008, Wiesinger also returned to the big screen and starred in a leading role in the ensemble film "Unschuld", based loosely on Arthur Schnitzler's play "Reigen" ("La Ronde"). After starring in "Darum" (AT 2008), Wiesinger played King Otto in the TV fantasy film "Der gestiefelte Kater" (2009), joined the ensemble of the satire "Gier" (2010) and appeared in the drama "Bis nichts mehr bleibt" (2010). Following his turn as the corrupt manager of a nuclear plant in "Restrisiko" (2011), he was one of the leads in Marcus O. Rosenmüller's period drama "Wunderkinder" (2011).

Wiesinger went on to star in the TV productions "Die Jagd nach dem Bernsteinzimmer" (2012), "Mit geradem Rücken" (2013) and "Der Tote im Eis" (2013). He received the Bavarian Television Award for his portrayal of former German president Christian Wulff in "Der Rücktritt" (2014). From 2015 to 2016, Wiesinger starred opposite his real-life partner Bettina Zimmermann in the series "Der Lack ist ab", for which he also served as author, producer and director.

After a supporting role in the theatrical release "Gut zu Vögeln" (2015), he was one of the leads in the 2017 comedy "Lucky Loser - Ein Sommer in der Bredouille".