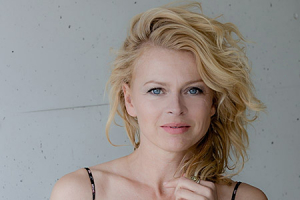 Isabell Gerschke, born in 1979 in Potsdam (in the then-GDR), had her first appearance on TV in 1991 in Hartmut Griesmayr's drama "Unser Haus". She became more widely known in 1996 with a leading role in the TV movie "Crash Kids", in which she played 14-year-old Laura who is drawn into the so-called "Crash Kid" scene around a charismatic leader (Marek Harloff). She had another leading role in the episode "Gefährliche Zeugin" (1998) of the long-running German crime series "Tatort", as a juvenile murder witness who gets chased by a professional killer. She was then a member of the cast of the crime thriller mini series "Warten ist der Tod" ("Waiting Means Death", 1999) alongside Ulrich Tukur as a robber, and of the thriller "Die Todesfahrt der MS SeaStar" ("Countdown at Sea") with Udo Wachtveitl in the lead as a hostage-taking terrorist. Friedemann Fromm cast her in the highly acclaimed psychodrama "Brennendes Schweigen" (2000) in a leading role as the revenge-seeking girlfriend of a murdered village drug dealer.

In 1999 Isabell Gerschke completed a singing course at the Musicians Institute Hollywood (USA) and received stage dance education at the school Danceworks in Berlin from 2001 to 2003. During this time she continued to appear in TV productions. Under the direction of Dominik Graf, she had an important role in the highly acclaimed Berlin milieu study "Hotte im Paradies" (2002, TV), as a hairdresser who is driven into prostitution by an unscrupulous pimp (Mišel Matičević).

After completing her training, Gerschke appeared in a number of TV productions. For example, in the leading role in the romantic comedy "Mädchen über Bord" ("Girl Overboard", 2005) and as the best friend of the main character (Felicitas Woll) in the comedy "Zwei Wochen Chef" (2007). She had a recurring role as an assistant in the TV series "Leo - Ein fast perfekter Typ" (2007). On the big screen, she played a supporting role in the post-World-War-II drama "Anonyma - Eine Frau in Berlin" ("A Woman in Berlin", 2008) and as the mother of a socially neglected teenager in the drama "Little Thirteen" (2012).

From 2010 to 2013 she played the role of Nora Lindner, the chief detective superintendent, in the popular TV series "Polizeiruf 110". From 2012 to 2016, she played police commissioner Kristina Katzer in pre-watershed series "Heiter bis tödlich: Akte Ex". In the following years, Gerschke took on further guest roles in TV series, for example in episodes of "Nord bei Nordwest" and "Beck is back!". She played leading roles in TV movies such as "Verführt - In den Armen eines Anderen" ("Seduced - In the Arms of Another", 2016) and "Camping mit Herz" (2019).

After a supporting role on the big screen in the pub milieu study "Leif in Concert - Vol. 2" (2019, as a regular guest of the pub), Isabell Gerschke had a leading role in the drama "Kopfplatzen" ("Head Burst"), in which she played a single mother who doesn't realize that her new boyfriend (Max Riemelt) is a paedophile.