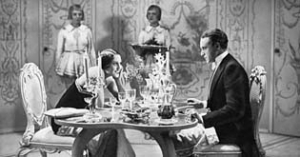 Petty costume designer Ronny is dreaming of the wide world. She is a poor girl, but young, beautiful and talented. Luckily she gets the job of designing the costumes for an operetta the young prince of Perusa has composed. Because of the urgency of the job, she has to take the costumes to Perusa herself. There they are waiting eagerly for a famous female singer, who shall entertain the prince and distract him from his administrative work. By this means his ministers hope to get more freedom in their own actions.

On her way to the hotel Ronny meets the prince. He doesn′t know, that the singer has refused the job and mistakes Ronny for the other woman. He is delighted and congratulates the theatre director for his good choice. Now the director is in fear of falling from grace because of the refusal of the singer and he begs Ronny to take her part in the play, the more so as she knows the operetta already inside out. She is willing to play along and while the prince is conducting the operetta himself, he falls in love with the new prima donna. The opening night is a great success.

Afterwards the ministers take Ronny to Castle Monbijou, the love nest of the prince′s favorites. Ronny thinks, that she is about to be bought by the prince, and is outraged. On the other hand the prince is crestfallen, because he thinks, Ronny has been bought. During a meeting Ronny gives the prince a piece of her mind and then leaves the capital by train. The prince is happy hearing her words. He manages to catch up with the train by car. And finally he is able to wrap his arms around Ronny.