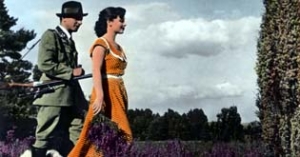 Former squire Lüde Lüdersen is poaching in the woods around Lüneburg, much to the distress of his daughter Helga, who is in love with local forest ranger Walter. When the body of a policeman is found, who was apparently shot by a poacher, Helga urges her father to move to the city. But during a big country fair, Lüdersen goes on the hunt again. He encounters the ruthless poacher, who wounds him. Saved by the ranger, Lüdersen is now proven innocent and Helga is free to marry Walter.