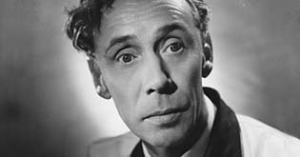 Rudolf Platte, born February 12, 1904, in Hörde, grew up in Hildesheim. At the age of just 16, he left high school before his graduation to attend actor’s training. In 1925, he made his stage debut at Freilichtbühne Düsseldorf in a production of Shakespeare’s play "The Merchant of Venice" where he performed in the leading role of Shylock despite his young age. Platte subsequently performed at theatres in Bad Harzburg, Hildesheim, Hagen, Wuppertal, and in Hannover as well as at Breslau’s Lobe-Theater where he not only performed on stage but also directed several productions himself.

In 1927, Platte moved to Berlin where he set up the cabaret stage "Die Katakombe" together with the political satirist, writer, and actor Werner Finck and the actor and director Hans Deppe. "Die Katakombe" was banned by the Nazis in 1935. Besides, Platte performed in musical revues.

Platte made his movie debut in 1929 in the film "Revolte im Erziehungshaus" that was based on Peter Martin Lampel’s youth drama. He then starred in countless major and minor supporting roles in films such as "F.P.1 antwortet nicht" ("F.P.1 Doesn’t Answer", 1932), "Viktor und Viktoria" ("Viktor and Viktoria", 1933) or "Gasparone" (1937). Platte, a sought-after ensemble actor because of his dry humour, mainly played amiable ordinary people. Despite his popularity, Platte by comparison rarely starred in leading roles like the one in Hubert Marischka’s film "Der Meisterdetektiv" (1943/44) alongside Grethe Weiser.

From 1940 to 1944, Platte served as the artistic director of Berlin’s Theater in der Behrendstraße. From the end of World War II until 1947, he was named the director of Theater am Schiffbauerdamm. He did not consistently return to the film business until 1949. During the following years, Platte rarely starred in serious character roles like, for instance, in the role of the Czech refugee in Rolf Thiele’s film "Mamitschka" (1955) or in the role of "Herr Wenzel" in Alfred Weidenmann’s film version of "Die Buddenbrooks" ("The Buddenbrooks", 1959). Instead, Platte mainly played rattling, clumsy, or gloomy and buffoonish domestics, vagabonds, or petty crooks in entertainment films like "Der Haustyrann" (1959). Although these roles were well received by the audience, they did rarely meet his acting talents.

From the early 1960s on, Rudolf Platte more and more often appeared on TV where he made a name as a versatile character actor, for instance, in 1960 in the title role of "Der Hauptmann von Köpenick", directed by Rainer Wolffhardt. His performance in Wolfgang Staudte’s film "Herrenpartie" ("Destination Death", 1963/64) was one of Platte’s last appearances on the movie screen. Instead, Platte starred in TV series like "Der Kommissar" and "Derrick" as well as in ambitious TV movies like "Peter Schlemihls wundersame Geschichte" (1967), also starring the young Götz George. Besides his TV career, Platte started a "third career" in the 1960s and 1970s as a folk actor speaking with a thick Berlin accent, but also as a serious stage actor, for instance, in several productions of Ibsen plays. In 1974, he toured Germany with a production of the comedy "Der Raub der Sabinerinnen" in the role of Schmierendirektor Striese.

In 1969, Platte received the Federal Cross of Merit, First Class. Furthermore, he also received the Filmband in Gold in 1978, an honorary award for his "continued outstanding individual contributions to the German film over the years".

In 1982, Platte made his last appearance on the movie screen (that was followed by four TV roles) in a small guest role in Rainer Werner Fassbinder’s film "Die Sehnsucht der Veronika Voss" ("Veronika Voss"). Rudolf Platte died on December 18, 1984, in Berlin.