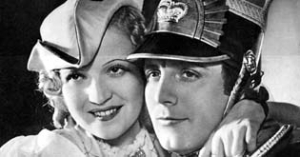 The courtiers at the royal court of Immendingen are in a bad mood. The annual court concert might get cancelled because Kammersänger Pinelle is once more indisposed. The court marshal, state secretary von Arnegg, and the artistic director are clueless, and Serenissimus, the Prince, is more than sad. He desperately wants to hear a beloved song that the beautiful Angelika Cavallieri had sung for him 20 years ago. Full of melancholy, he thinks of this time and their short, but happy, love. Thus, a young and talented singer from Munich named Belotti has to be brought to the court.

At the border station, the sent out carriage meets the Post carriage that is coming from Munich. Young Walter von Arnegg who checks the travellers immediately notices pretty Christine Holm who is looking for her father in Immendingen. She is allowed to travel on, and von Arnegg shows her the beautiful residence. But when Walter′s father gets to know this, Christine is ordered to return to Munich immediately. Walter escorts her to the border and meets the returning court marriage who is missing Ms. Belotti. But Christine is able to clear things up because she herself is Ms. Belotti. Now, she is received at the court in a jubilant manner. Furthermore, she finally finds her father because her mother, Ms. Cavallieri, told her that he had to be in Immendingen. The court concert begins...