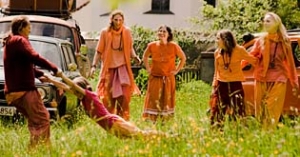 My Life in Orange

It′s 1980 and enlightenment comes to the back and beyond of Bavaria! Bhagwan disciple Amrita moves with her two children, 12-year-old Lili and nine-year-old Fabian, together with her equally esoteric roommates, from Berlin to the Bavarian backwoods. Primal scream therapy and wholemeal meet shooting club and more earthly horizons. While Amrita sings Indian mantras, sitting half naked on the Stone of Enlightenment, her arch-conservative neighbor and the village mayor, for whom the ′weirdoes′ are, of course, also linked to left-wing terrorists the RAF, peers through the hedge, stunned.

But when the yogis also set up a therapy center in the village, peaceful life goes out the window. The villagers′ mistrust of the newcomers spirals out of control. And Lili is caught between the fronts. When she is also shunned by her schoolmates, she wishes nothing more than to have a normal family, and starts to live a double life. At home she wears orange, eats vegetarian and spouts left-alternative slogans. At school she wears a grey, pleated skirt and recites the Lord′s Prayer with everyone else. And while Bhagwan′s right hand is on his way to inaugurate the new Buddha Hall, Lili is now a member of the local brass music club, preparing for the annual village festival. It′s here where things between the yogis and villagers come to a head. And Lili is caught in the middle, no longer knowing where she belongs...