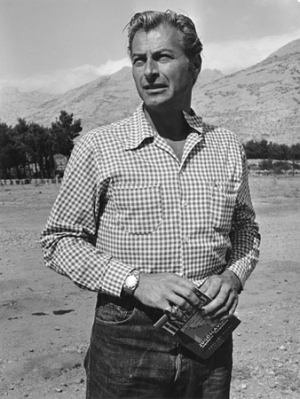 Alexander Crichlow Barker Jr. was born on May 8, 1919 in Le Ray, New York State. Coming from a wealthy and traditional home, he attended private schools in New York and Boston. Barker dropped out of his architectural studies at the University of Princeton due to poor performance in mathematics. After that, he tried to gain a foothold as an actor on New York stages at the age of 19 and was given a supporting role in "The Five Kings" in the production of Orson Welles. In 1939 he was discovered by a talent scout for 20th Century Fox, but in the end he didn't get hired because he was under age. He then worked temporarily in his family's construction company until he volunteered for military service in 1941. In 1942 he married his childhood friend Constance Thurlow. It would be the first of a total of four marriages in the course of his life.

As a highly decorated major, Barker left the army in 1945 and, after giving it another try at Fox, was given a supporting role in "Dollface" (US 1946). After further small roles, Barker appeared in Edward Dmytryk's "Crossfire" in 1947. In 1949 he played his first and only major role in the U.S., which he revisited in five movies until 1953: As successor to Jonny Weissmüller, he impersonated Tarzan. Although Barker now received further roles in westerns and crime thrillers, the athletic and 6 feet and 3 inches tall man could not get rid of his image as a sought-after jungle hero in the States. In 1959 the 40-year-old moved to Italy, where he began to work in low-budget productions and made a name for himself in the 'cloak-and-dagger' genre, which was particularly popular in Europe. He played leading roles in "Il Figlio del Corasaro rosso" ("The Revenge of the Red Corsair", IT 1959) and "Robin Hood e i Pirati" ("Robin Hood and the Pirates", IT 1960). In the same year he was hired by Federico Fellini for "La Dolce Vita" ("The Sweet Life") and played the jealous husband of movie star Sylvia (Anita Ekberg).

In 1961 Barker met the German producer Artur Brauner in Rome. Brauner cast him in the role of FBI agent Joe Come in "Im Stahlnetz des Dr. Mabuse" ("The Return of Dr. Mabuse", DE, FR, IT 1961) and then in "Die unsichtbaren Krallen des Dr. Mabuse" ("The Invisible Dr. Mabuse", DE 1962) both directed by Harald Reinl. In the following six years Barker starred in eight Reinl films. His roles as FBI agent Come and as the caring, noble chief physician in "Frauenarzt Dr. Sibelius" (FRG 1962) helped him to fame in the German-speaking world. Fragmentarily proficient in the German language, he was mostly dubbed by Gert-Günther Hoffmann in his films. Barker spoke Italian and Spanish fluently, albeit with a strong accent.

In 1962 the first film adaptation of the popular Karl May novels followed: "Der Schatz im Silbersee" ("The Treasure in the Silver Lake") with co-star Pierre Brice as Winnetou. As Old Shatterhand, Barker appeared in front of the camera a total of seven times for the successful series. Other May characters he impersonated were Kara Ben Nemsi in "Der Schut" ("The Yellow One", 1964) and "Durchs wilde Kurdistan" ("Wild Kurdistan", DE 1965) by Franz Josef Gottlieb or Dr. Karl Sternau in Robert Siodmak's "Der Schatz der Azteken" ("Treasure of the Aztecs", 1965). Despite further engagements as a yoga teacher and Liselotte Pulver's affair in Axel von Ambesser's "Frühstück im Doppelbett" ("Breakfast in Bed", 1963) and as a busy fashion writer, who was seduced anew by his onscreen wife Shirley MacLaine in "Woman Seven Times" (IT, FR, US 1967), Barker could not get rid of his image of the virtuous Old Shatterhand - similar to his Tarzan role in the USA.

The hype around the 'blood brothers' Barker and Brice was unparalleled in Germany. The Westerns were box office hits and were among the most successful German post-war productions. In addition to other German adventure and action films, however, Barker also starred in the British action films "Code 7, Victim 5" (UK 1964) and "24 Hours to Kill" (UK 1965), which further underpinned his image as a heroic charismatic person.

In the second half of the 1960s, Barker's career slowly slackened in the wake of Karl May fatigue and the general cinema crisis, while his affairs made headlines in the tabloids. He then appeared in two more May films "Winnetou und das Halbblut Apanatschi" ('Winnetou and the Crossbreed", DE, YU 1966) directed by Harald Philipp and Reinl's "Winnetou und Shatterhand im Tal der Toten" ("The Valley of Death", DE, YU, IT 1968). In 1967, Barker was awarded the popluar film prize Silver Bambi as the most popular foreign actor of 1966 and made his last German film with Franz Josef Gottlieb "Wenn du bei mir bist" (DE 1970), before he tried to gain a foothold in Hollywood again in late 1970. There he appeared alongside Robert Wagner and Janet Leigh in an episode of the then popular series "The Name of the Game". Apart from a few guest roles, however, Barker never made a comeback in the States.

On May 11, 1973, Lex Barker died after suffering a heart attack on the streets of Manhattan. Barker was the father of Alexander Crichlow Barker III and Lynn Thurlow Barker from his first marriage to Constance Thurlow and of Christopher Barker from his third marriage to the Swiss actress Irene Labhart.