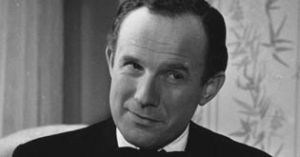 Axel Eugen Alexander von Oesterreich was born in Hamburg on June 22nd 1910. Following the advise of his father, a merchant originally hailing from St. Petersburg, he changed his name to "Axel von Ambesser". Although, not classically trained as an actor, the theatre-crazy Ambesser was given parts at the Hamburger Kammerspiele. This was followed by engagements in Augsburg and Munich, where he was often cast as the young hero, charming suitor and comic relief. In 1936, her performed at the Deutsche Theater in Berlin, and until 1945, he appeared at the Theater in der Josefstadt, Vienna and the Berliner Staatstheater.

After WWII, Ambesser was an ensemble member at the Münchner Kammerspiele before he became a freelancing actor in the late 1940s. He also started writing and directing for stage, screen and television, and in some cases, he directed himself as the lead of his own plays. And with hits like "Das Abgründige in Herrn Gerstenberg", "Wie führe ich eine Ehe?" or "Omelette Surprise", Ambesser was the most popular of the living German theatre authors in the post-war years.

In 1953, he made his debut as film director with the comedy "Glück muß man haben" (also released under the title "Drei, von denen man spricht"). Until, the mid-1960s, he directed 19 feature films, including "Der Pauker" (1958), "Der Gauner und der liebe Gott" (1960) and "Der brave Soldat Schwejk" (1960), which starred Heinz Rühmann and was awarded the Golden Globe for Best Foreign Language Film. Other box office hits were "Kohlhiesels Töchter" (1962) and "Er kann’s nicht lassen" (1962), and Ambesser also continued to work as an actor, sometimes playing supporting roles in his own films or appearing in other productions like Rolf Hansen"s "Gustav Adolfs Page" (1960). Ambesser also scripted the dialogue for the German-language release of Chaplin"s "Monsieur Verdoux" and dubbed Chaplin for the film.

From the mid-1960s on, Ambesser exclusively worked as an author and director for television. Among his works were musical comedies like "Der fidele Bauer" (1971) or elegant romances like "Begegnung im Herbst" (1977), starring Hilde Krahl and himself. In 1975, he was awarded the Order of Merit of the Federal Republic of Germany.

In the early 1980s, Axel von Ambesser mostly retired from television but continued to work in the theatre. In 1985, he published his memoirs, and the same year, he was awarded the German Film Prize for his lifetime achievement. He passed away in Munich on September 6th 1988.