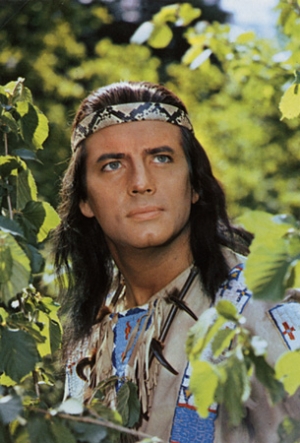 Pierre Brice, born February 6, 1929, in Brest, France as Baron Pierre Louis Le Bris became a theatre actor first but then abandoned his acting career to voluntarily join the French army. During his army career he fought in the wars in Indochina and in Algeria. After leaving the army, he attended the Paris conservatory and worked as a photo model and dancer. During the 1950s, Brice already played several minor roles, for instance in Italian and Spanish history films.

In 1962, Brice met producer Horst Wendlandt at the Berlin Film Festival. Shortly after, Wendlandt offered him the role of Winnetou in "Der Schatz im Silbersee" ("Treasure of Silver Lake"). In this and in ten other Karl May adaptations, Brice celebrated international success alongside his co-stars Lex Barker and Stewart Granger as the chief of the Apache Indians. Winnetou's (preliminary) death in "Winnetou III" in 1965 caused a wave of viewer protests that had been unprecedented.

Despite several theatre engagements in Paris, Brice was not offered many roles because he was strongly committed to his image as an Indian chief. Thus, he starred as Winnetou in numerous productions in German open air theatres from the 1970s to the late 1980s. In 1979, Brice also played the title role in the French-German TV series "Mein Freund Winnetou" ("My Friend Winnetou"). However, the series failed to attract a large German audience.

Brice, who had also performed as a chanson singer since 1965, appeared in several TV series during the 1990s, for instance in "Das Traumschiff" or in "Ein Schloss am Wörthersee" and starred in numerous boulevard theatre comedies. In 1992, Brice received the German Cross of Merit, First Class, for his lifetime achievements. In 2007, he received the order of Knight of the French Legion of Honor for his great service to the friendship between the German and the French. Brice also published his autobiography "Winnetou und ich" in 2004.