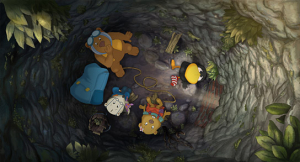 Raven the Little Rascal – Hunt for the Lost Treasure

Director Verena Fels is embarking on her animation feature debut with a brand-new adventure of "Raven the little Rascal". Together with longtime Raven collaborators, co-director Sandor Jesse and screenwriter Katja Grübel, she is sending the cheeky little hero on an exciting new journey. Raven can’t believe his eyes when he makes a stunning discovery in Mrs. Badger’s attic: a real treasure map drawn by none other than Grandpa Badger, who mysteriously disappeared many years ago. According to an ancient legend, whoever manages to find the treasure will become king of the forest, something that Raven simply can’t resist. Together with his best friend Eddi Bear and eager Little Badger, he sets off on a thrilling quest to find the treasure…