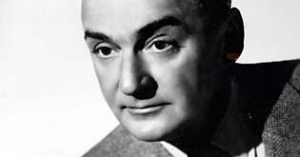 Wilhelm Anton Frohs was born on April 7, 1903, in Vienna. His father was the porcelain painter Wilhelm Frohs, his mother the miller's daughter Maria Perschl. After finishing secondary school and working with some amateur theater groups, Forst got his first stage engagement in 1919 in Cieszyn, Poland, as "second adolescent lover and comedian, with choir commitment" (Forst 1963). Later, he worked for a number of other German-speaking provincial theaters.

In 1925, Forst got a contract at the Metropol-Theater in Berlin, where he appeared in operettas and revues, followed by engagements at the Carltheater in Vienna, the Theater des Westens in Berlin and the Apollo-Theater in Vienna. In 1927, he returned to the straight theater. In Berlin, he worked with Erwin Piscator (Lessing-Theater) and Gustav Hartung (Renaissance-Theater), followed by a three years" engagement at Max Reinhardt's Deutsches Theater ("German Theater").


In 1920, Forst made his movie debut with the Austrian film "Der Wegweiser", but it wasn't before 1927 that he could be seen on the big screen on a regular basis. In two movies he starred alongside Marlene Dietrich: In "Café Electric", he played a pimp, and in "Gefahren der Brautzeit" ("Dangers of the Engagement Period"), he portrayed a womanizer – an "elegant young greyhound … smug" (Lotte H. Eisner).

In 1929, he attracted huge attention with his first appearance in a sound film: In "Atlantic", he played a musician who sits at the piano when the ship starts sinking. While singing the sad lines "Es wird ein Wein sein, und wir wer'n nimmer sein, es wird schöne Madeln geben, und wir wer'n nimmer leben...", he suddenly realizes the cruel truth of the lyrics and collapses.

In the early 1930s, Forst became a darling of the public with a couple of musical comedies. "Zwei Herzen im ¾ Takt" ("Two Hearts in Waltz Time") was his first collaboration with director Geza von Bolvary - six more were to follow until 1934. With one exception, all of these movies were written by Walter Reisch, who also offered him tailor-made roles for movies by directors such as Paul Martin ("Ein blonder Traum"/ "A Blonde"s Dream") and Karl Hartl ("Der Prinz von Arkadien"/ "The Prince from Arcadien"). "The piece of clothing that suited him best was the tailcoat – complete with cane and top hat, of course. He moved in it as if it were his second skin." (Buchka, 1980).


In 1933, Forst made his writer-director debut with "Leise flehen meine Lieder" ("Lover Divine"), a movie about Franz Schubert. His second film, "Maskerade" ("Masquerade in Vienna"), became a world-wide success and made Paula Wessely an instant movie star. For "Mazurka", he brought Pola Negri back to Germany. During the following years, Forst worked mostly in Vienna, where he set up his own film company in 1936. The "Willi Forst-Film-Produktion" opened a German branch in 1937 and was shut down in 1950.

In 1937, Forst became a member of TOBIS' supervisory board. From 1938 until 1945 he was a member of the supervisory board of the Wien Film GmbH. "When my homeland was occupied by the Nazis, my work turned into a silent protest. It sounds bizarre, but it is the truth. My most "Austrian" films were made during a time when Austria had ceased to exist. I gave people what they wanted most of all: oblivion, joy… My movies seemed to be from a time when charm, noblesse, tenderness and gallantry were still crucial elements." (Forst, 1963).


His role models were Ernst Lubitsch and René Clair; beneath the cheerful surface of his Viennese movies lies the knowledge that this era is history. "Bel Ami" (1939), based on the novel by Guy de Maupassant, turned out to be his most popular film. The movie, in which he also starred as the eponymous hero, is connected with his name until today.

After a long preparation phase, Forst started shooting "Wiener Mädeln" ("Young Girls of Vienna") in 1944 in Prague, hoping to produce the first German postwar movie. When the premiere took place in 1949, however, the movie flopped at the box office, as did Forst's following works, which resembled his earlier films.

In 1951, his movie "Die Sünderin" ("The Story of a Sinner") became "the biggest scandal in postwar German cinema" (Hembus/Bandmann). Churches attacked the film because of a brief scene in which Hildegard Knef posed naked in front of a painter, and because the movie allegedly glorified suicide. The movie provoked protest demonstrations and was banned in several cities. Nonetheless (or because of this), it went on to become a huge box-office success.

Forst"s last movie was programmatically titled "Wien, Du Stadt meiner Träume" ("Vienna, City of My Dreams", 1957). After that, he retired from the film business: "My style is no longer in demand. I exit, somewhat damaged, yet in proud greatness à la Garbo. It is better to leave, then to be forced to leave."

He and his wife Melanie, whom he had married in 1934, lived in Brissago (Ticino, Switzerland). Melanie died in 1973, four years later Forst relocated to Vienna. In the same year, he refused to participate in an episode of the TV show "Sterne, die vorüberzogen" that was dedicated to him.

On August 11, 1980, Willi Forst died in Vienna after an operation of the bladder.