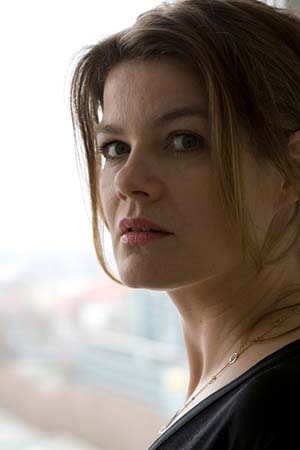 Birge Schade was born in Wilster on February 7 1965. Living in Bavaria from age six on, she went on to be trained as a ballet dancer and actor in Munich. After completing classes, she became an ensemble member of the Bremer Shakespeare Company (1994-1997) and also performed in stage productions in Berlin.
She made her screen debut in a bit part in the 1988 production "Herbstmilch" by Joseph Vilsmaier. This was followed by supporting roles in several TV productions, including the widely discussed vigilante drama "Amok" (1994), in which she appeared opposite Helmut Zierl. Birge Schade was also a regular cast member of the 17-part-series "Wie Pech und Schwefel", playing a teacher who falls in love with a married man. Prominent roles in the comedies "Affären" and "Der Leihmann" and in Joseph Vilsmaier's drama "Schlafes Bruder" ("Brother of Sleep") further established her as a screen actress.

She again teamed up with Dominik Graf, who cast her as a well-meaning prostitute in his drama "Hotte in Paradies" (2003). This performance, as well as her impressive turns in "Katzenzungen" (2003) and "Delphinsommer" (2004) garnered Birge Schade the 2005 German Television Award.

She played the wife of a federal police detective (Heino Ferch) in Matti Geschonneck's TV thriller "Mord am Meer" (2004), and a mother whose daughter becomes the victim of a psychopathic killer in Matthias Glasner's "Blond: Eva Blond! Der sechste Sinn" (2006).

Though she predominately worked in television, she also appeared in several cinema releases: She portrayed RAF terrorist Ulrike Meinhof in Christopher Roth's "Baader" (2001), played the mother of a struggling teenage girl in the tragicomedy "Bin ich sexy?" (2004), and guest-starred in the box office hit "Männerherzen" ("Men in the City", 2009).

In 2011, author and director Markus Busch cast her as the lead of his drama "Die Räuberin". In the 2012 release,  Birge Schade plays an actress who enters a fateful relationship with a teenage boy in rural Northern Germany. The same year, she also had a starring role in Hans Christian Schmid's drama "Was bleibt" ("Home For the Weekend"), which premiered in the competition of the Berlin IFF.