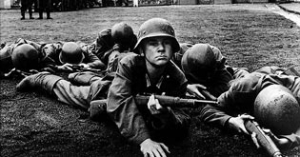 Germany, April 1945. In a small German town a group of high school kids are conscripted into the army during the last mobilization of the war – even though American troops have already broken through the German lines. The school kids are to defend a supposedly „strategic“ bridge.

Their teacher tries in vain to convince the commanding officer of its pointlessness. The school kids, however, feel euphoric, and are indeed disappointed that they are not being sent to the front. After waiting wearingly at the bridge, the enemy are finally sighted. In the ensuing battle almost all their friends are killed. With a German commando sent shortly thereafter to blow up the bridge, the survivors realize that all their fallen comrades have died wholly in vain.