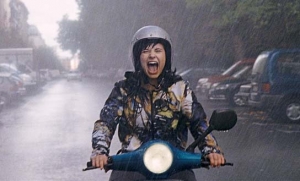 The Dead and the Living

25-year-old Sita lives in Berlin, where she studies German literature. On the side, she shoots video portraits of casting show participants. One night, Sita ends up in the studio of Israeli photographer Jocquin. There's something about him which deeply moves Sita, and she can't forget him. To attend her beloved grandfather's 95th birthday, Sita travels to Vienna, where also her father Lenzi resides with his new wife and their little son. The night after the big party, Sita discovers an old picture of her grandfather in her father's apartment: on the photograph he's wearing a SS uniform. Against her father's will, Sita begins to investigate her granddad's past. She soon must realize, that both her grandfather and father have kept many secrets from her.

A document from an archive in Vienna leads her to Poland. In Warsaw, Sita not only finds more important documents, but also makes the acquaintance of Silver, an American political activist, who helps her on her search. Sita gets more and more entangled in her family's history. On her journey into the past, she meets Jocquin again. Sita realizes that it is not about to get rid one's guilt, but to take responsibility for others.