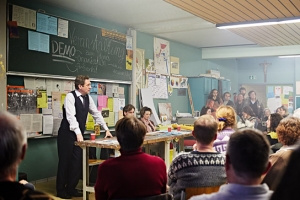 Bavaria in the early 1980s: The economic situation in the town of Wackersdorf is tense. People are losing their jobs and there is no boom in sight. As district administrator Hans Schuierer’s re-election is in danger, a message from the Bavarian State Government is welcome news: The plan is to build a nuclear reprocessing plant in Wackersdorf that would create many new jobs. At first, Schuierer is truly excited and celebrated as a savior by the locals. However he soon becomes suspicious when he realizes how the State Government tries to drastically and illegally mute criticism and nip protests in the bud. He starts to dig deeper and finds out that the plant is by no means as harmless as the government tries to make people believe. Supported by activists such as the young Monica, teacher Eberwein and the local priest, Schuierer becomes an outspoken opponent of the planned construction and a figurehead of the protest movement.