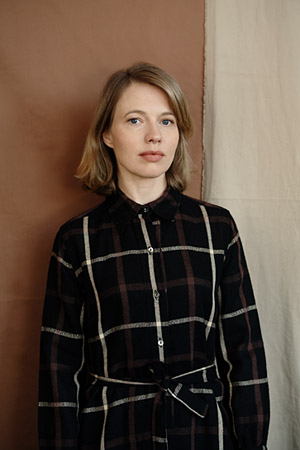 Anna Brüggemann, born March 24, 1981 in Munich, started acting as a member of the youth club of Städtische Bühnen Regensburg from 1995 to 1998. In 1997, she also attended a musical workshop at Bayerische Theaterakademie and took actor's training at "Acting Academies" in Regensburg and Waldmünchen. In 1996, she made her TV debut in the thriller "Virus X – Der Atem des Todes" and starred in several supporting roles in the following years, among them Stefan Ruzowitzky's successful thriller "Anatomie" ("Anatomy").

Brüggemann made her breakthrough performance in the TV movie "Das schwangere Mädchen" alongside Ken Duken. The film saw her in the role of a school girl who after an unwanted pregnancy gets involved in a medicine scandal. After "Das schwangere Mädchen", Brüggemann starred in several leading and supporting roles in TV movies such as Markus Imboden's drama "Ein Dorf sucht einen Mörder" that won a Grimme prize nomination, in TV series such as "Bella Block" and "Ein starkes Team", as well as in unconventional movie productions such as "Mitfahrer" ("Traffic Affairs"), "Kleinruppin Forever", "Oktoberfest" and in "Neun Szenen", directed by her brother Dietrich Brüggemann.

In 2010 she is seen in the drama "Bergfest" and in "Renn, wenn Du kannst", again directed by her brother Dietrich and co-written by Anna Brüggemann, alongside Jacob Matschenz and Robert Gwisdek. The film gains several prizes.

After playing a nun in the TV production "Utta Danella Eine Nonne zum Verlieben" (2010) and a maid in the period comedy "Der Sommer der Gaukler" (2011), she again collaborated with her brother: The comedy "3 Zimmer/Küche/Bad" (2012), for which she co-wrote the screenplay, also reunited Brüggemann with actors Robert Gwisdek and Jacob Matschenz. Along with them, she plays a student who lives in a shared flat in Berlin.

The following year, the siblings again worked together on the screenplay for "Kreuzweg" (2014), which premiered in the competition of the 2014 Berlin IFF. The film depicts the ordeal of a 14-year-old girl who suffers from her rigid, ultra-religious upbringing, and went on to win the Silver Bear for Best Screenplay.

After a small appearance as a pharmacist in the drama "Nachspielzeit" ("Extra Time") which premiered at the 2015 Max Ophüls Preis film festival and starred Mehmet Atesci and Friederike Becht, she was once again in front of the camera in a film directed by her brother: In the satire "Heil" (2015) about an Afro-German writer (portrayed by Jerry Hoffmann) who is harnessed as a propaganda figure by a neo-Nazi leader (Benno Fürmann) after being hit on the head, she played the latter's girlfriend.

Between 2016 to 2020, she stood in front of the camera for no less than five films of the "Tatort" crime series as well as for "Kindeswohl" from the "Polizeiruf 110" crime series. The "Tatort" films included "Murot und das Murmeltier" (2018), directed by her brother and starring Ulrich Tukur as the investigating inspector, "Kaputt" (2019) directed by Christine Hartmann with Brüggemann in a central role as a police officer suspected of murder, and "Das ist unser Haus" (2020) set in Stuttgart and again directed by her brother.

At the end of 2018 filming for "Nö" began, a feature film with surreal elements about the love and states of mind of a young couple, again penned jointly by the Brüggemann siblings and with Anna Brüggemann in a leading role. Around the same time, she was also working with Caroline Link on the screenplay for the successful children's book adaptation "Als Hitler das rosa Kaninchen stahl" ("When Hitler Stole Pink Rabbit"), which was directed by Link and released in theatres in late 2019. In 2020 it won the Bavarian Film Award as well as the German Film Award for Best Children's Film.

At the Berlinale 2018, Anna Brüggemann launched the much-discussed #NobodysDoll campaign, in which she and colleagues such as Lavinia Wilson, Franziska Weisz and Palina Rojinski campaigned for the abolition of the common dress code for women on the red carpet, which is characterized by the "patriarchal gaze" - high heels and low necklines.